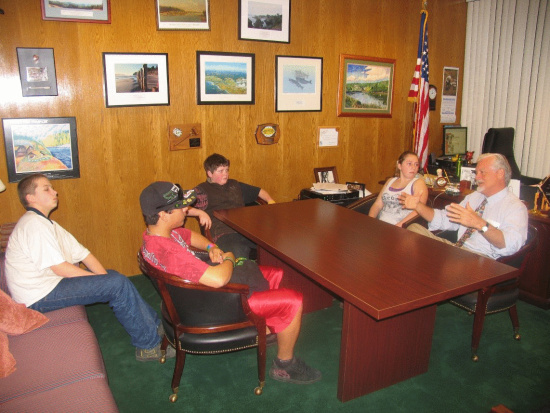 Photo of SoHum kids meeting with Assemblyman Wes Chesbro in his Capitol office on Jan 13th. In red is Luis Ruiz of Redway, in white is Cody Bowen of Garberville, in dark clothes is Jeffrey Bittick of Redway and sitting next to Chesbro is Fawna Meeks of Ettersburg.

…aide to Gov. Jerry Brown testified that the governor supports the proposal.

But Brown still wants to eliminate specific funding for buses in his 2012-13 budget, along with removing earmarks for a variety of other K-12 programs. He instead proposes a new block grant funding system for schools, out of which he suggests districts could fund bus service if they choose.

This morning Senate Bill 81, which trades in the current slashing of school bus funding for a reduction of $42 per student, passed the budget committee. This bill more equitably spreads funding cuts across school districts.  The current cuts triggered in December by shortfalls in tax collection fell heavily on rural students who must travel great distances and can’t rely on public buses. This bill takes equally from all districts based on student population.

According to Wes Chesbro’s communications director, Andrew Bird, “Next it goes to the Assembly Floor for a full vote of the Assembly. Then it goes back to the Senate for concurrence (it doesn’t have to go through the committee process in the Senate). Then it goes to the Gov. for his signature. Hopefully this will happen on a fast-track basis. If you watched the Committee hearing, you will see it has very strong bipartisan support. Also extremely encouraging is what the Gov.’s representative from the Dept. of Finance said, they don’t oppose the bill because is preserves the general fund savings. Today was the first but a huge step forward.”

Southern Humboldt parents and students who showed up in droves at the capitol to protest the cuts are excited by the progress of the bill. Clover Willison, a parent and activist on the subject, wrote on Bus Stop to Nowhere (a site devoted to restoring funds for school transportation) after watching the debate, ” [Chesbro halted]  the continuance of the next discussion to reiterate and remind the Assembly that our district has already issued layoff notices and that for us time is of the essence. He urged and requested that this matter be expedited to the Senate. Empowering!”

Layoffs and termination of most bus services for the Southern Humboldt Unified School District begin on February 18th.