The World’s Most Fuel-Efficient Couple: Or, Beat Humboldt Gas Prices By Being Smooth »

The U.S. Burns, but Eureka is the Most Freakishly Cold Place in the Country

The National Oceanic and Atmospheric Administration just published an omnibus summary of the state of our national hellscape. Its report looks at historical climate data for the first six months of the calendar year going back to the 19th century, and it concludes — big surprise — that this has been the hottest first half of the year on record in this fallen nation of ours. (Mother Jones has a good write-up.)

Check this out, though: When you drill down by region in the NOAA report it turns out that the Pacific Northwest bucks the trend. Coastal Alaska, Washington, Oregon and the North Coast of California had a cooler-than-usual January-June. Furthermore: If you go to this page and click on the “Year-to-date temperature anomalies” tab, you’ll see that Eureka was the most unusually cold place in the nation over that period of time, with a standard deviation of .8 below the regular.

Can “fog tourism” be far behind?

Below: NOAA’s “Haywood Plot” for the Woodley Island weather station over the last 7 years, with hottest year, coldest year, average year and last year all labeled. Click it to big it. 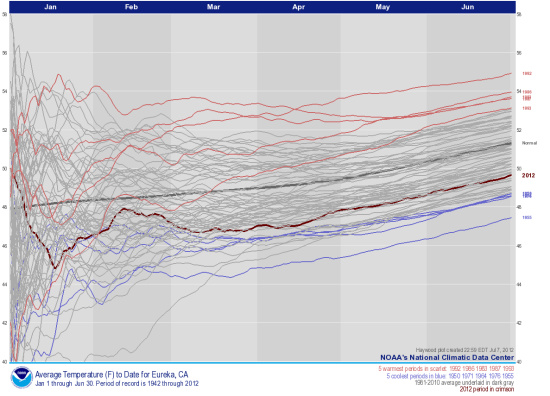