Gorgeous Night for a Game! – Crabs Hall of Fame Tonight! » 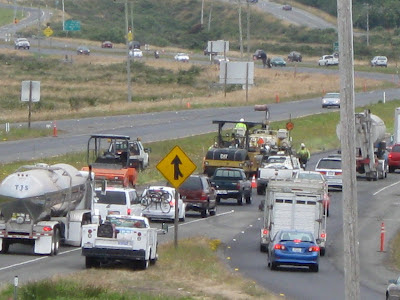 Yesterday, motorists on northbound 101 were stuck in a unusual 45-minute stop-and-go traffic jam stretching from as far south as College of the Redwoods to north of Humboldt Hill.

The cause? Road crews closed one lane.

How did this relatively routine closure strangle traffic so effectively?

CalTrans had been grinding and repaving northbound 101 from one mile south of the Fields Landing Overhead to just north of the Herrick Avenue Overcrossing, closing the right lane as a result.

“The lane closure, where it was necked down to one lane, was a little bit longer than on some of our other types of work, and the traffic seemed like it was maybe heavier than we anticipated….

“We were monitoring the situation… our construction people tried making some changes to the traffic control to try and get the traffic through more efficiently, but unfortunately no matter what we did yesterday, the queue just kept backing up further.”

He said the added length of the lane closure can increase the potential for traffic density to ripple back down the lane.

Humboldt’s polite roadway etiquette may have contributed, as some drivers were merging into the left lane earlier than necessary. “It goes counter-intuitive our wanting to be polite,” he said.

“[Drivers] should be “slightly slowing down as they approach the cone zone, but they should not merge until the arrow is telling them to merge. At that point they should go every other car, and that’s really the most efficient way for traffic to get through there.”

Today’s northbound travelers should see smooth sailing, he said, and next week’s road painting session should be much smoother.