It Takes a Community… 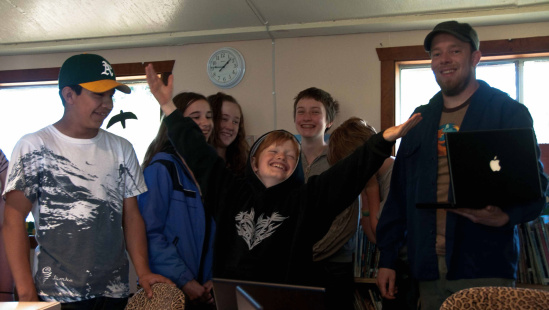 Like many schools, Salmon Creek Community School needed new computers.  The ones they had were out of date and didn’t allow for internet downloads of software. Some had broken cd drives.The K key on the oldest computer would stick and sometimes for no reason would randomly type the letter K into a document.  This was terribly frustrating to 9 year old Malachi Church (pictured in the center above) who used the computer for keyboarding tests.  The computer would spew random letter’s on his screen and this would cause his speed and accuracy to drop.

The tiny school which exists off the grid with solar power and a generator has existed without government funds for forty years. The community, the students, the parents and local businesses have all united to keep it going. This time was no different.

Garth Epling (pictured on the right above) of Emerald Technologies heard of the schools’ plight. He offered to restore a Macbook for them.  This would replace the worst computer.  Inspired, the students decided that the money that they had worked together to raise over the last three years by creating crafts and selling baked goods for new playground equipment would be best spent on new computers.  But, what was the optimum buy?  The eighth graders searched the internet looking at new and refurbished options. They created a list of tough questions to find the option they could afford that met their needs. But, in the end, they learned that Emerald Technologies in their hometown of Garberville was able to beat the best price online. Elated, they worked together on the one good computer that had been donated last year  by the Humboldt Area Foundation and, using iMovie, created a presentation for their school board on what they needed and why. The Board approved their request.

On May 1st, Epling brought the three new computers to the tiny country school.  The students gathered around and couldn’t believe what they had bought and Emerald Technologies had donated. Jonathan Archibold was impressed with the donated computer. “The color is neat.  It is cool how it is black.”  He appreciated the local business helping out. “That was really nice….I love that place.”

“They are so cool and I wish I got one,” says 11 year old Alisha Homewood wistfully. Not everyone received a new computer but the students have plans to raise money for more. Quilt sales and bake sales are in their plans for summer. Even eighth grader Maddy Frazer who would be moving on next year offered to help.  It takes a community to keep this small school and many others going.  Thanks to everyone who takes the time to help the young students here and elsewhere.

Salmon Creek Community School is accepting new students for the 2012 -2013 school year in grades K-8th. If interested, call 943-1500 and time will be made available for a tour.

Full disclosure:  I teach at Salmon Creek Community School and am ridiculously proud of its students.  The cute little one with his hands raised in the air is my son.