« It Takes a Community…

On 05-01-2012 at about 1300 hours the Humboldt County Drug Task Force received a telephone call from a Sergeant with the Utah State Police. The Sergeant informed A Drug Task Force Agent that a Utah State Trooper had just made a traffic stop on a subject named, Robert Jason Smith age 32 from Mckinleyville, California. During the traffic stop the State Trooper detected the odor of marijuana emitting from the vehicle. When the State Trooper searched the vehicle he located $ 215,000 dollars in cash in the vehicle that smelled like marijuana.

On 05-01-2012 at about 1700 hours, with the information provided by the Utah State Police a search warrant was obtained for Robert Smith’s residence located in the 3000 block of McKinleyville Avenue, McKinleyville. At the residence officers located a commercial indoor marijuana growing operation. Officers seized 233 growing marijuana that ranged in size from 2 feet to 3 feet along with dried processed marijuana from inside of the residence. 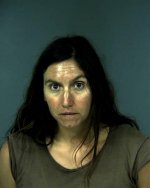 When officers served the search warrant they located a female subject inside of the residence named, Tara Diva Fulgenzi age 31. Officers determined that Fulgenzi was involved with the marijuana growing operation and arrested her for possession of marijuana for sales. Fulgenzi was transported and booked into the Humboldt County Correctional Facility and her bail was set at $ 25,000 dollars.

Robert Smith was arrested by Utah State Police for Money Laundering and for Conspiracy to Distribute Narcotics. An arrest warrant will be submitted to the Humboldt County District Attorney’s Office for Smith’s arrest in California for possession of marijuana for sales.