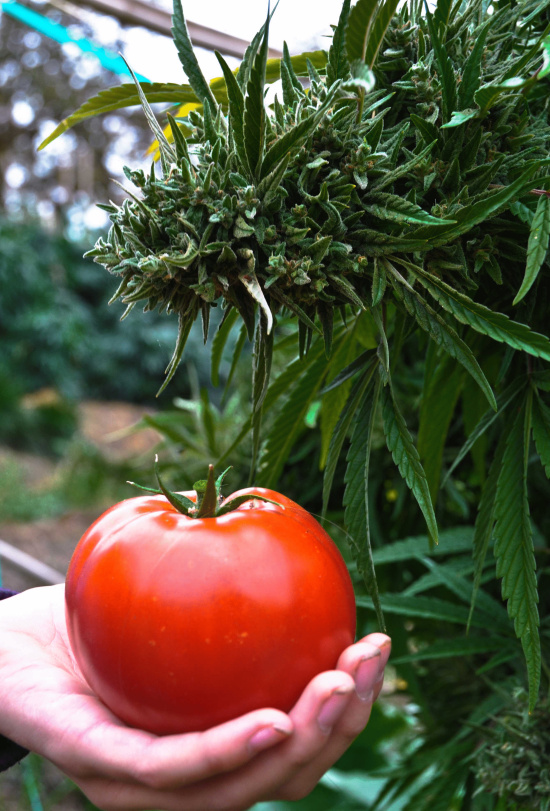 The Fruits of a Humboldt Garden

“Our thrust is big grows…but for every 10 big grows maybe a small one” will get swept up also, explained Sheriff Mike Downey earlier today in response to questions about the recent spate of relatively modest growers who have been arrested. These arrests have come on the heels of an assertion in this blog by Downey that he mostly wasn’t going to be able to get to “mom and pop” growers because he had so many giant grows to deal with.

Downey recently asked for federal help in dealing with marijuana in this county.  He explained his reasons for doings so earlier this month  and added “We’ve got enough large scale industrial grows in Humboldt County to keep me busy for years. I know there is still a lot of mom and pop’s out there making a little bit of money to pay their taxes and maybe go on vacation—I’m not going to get to those people. It’s just not within the realm of possibility considering what we are seeing out there in the field.”

Then came a trio of busts which seemed to contradict his assertion. On September 6th came a Fortuna bust which our own Hank Sims titled rather aptly, Uh, Goodbye Mom and Pop? Three Federal Agencies, Three Local Agencies Combine to Take Out 52-Plant Grow House.

Then there was the bust on the tenth which  garnered cash and only four pounds. And finally, came yesterday’s raid by the Humboldt Co. Drug Task Force which collected a relatively small number of indoor plants—108 that were only 12 inches tall—-and “about one pound of dried, processed marijuana… .”  In addition, the two people arrested were accused of child endangerment and had their 10-year-old daughter placed by Child Welfare with a relative and their bails were set at $50,000.  In comparison, a man arrested on the 11th for threatening his girlfriend’s father while holding a gun only had a $25,000 bail.

According to Downey though, these events don’t negate his earlier statements. “I’m trying to draw a connection with a problem in the hills…Our focus is clearly on the larger grows….The outdoor scene is so enormous, our main thrust is not the smaller grows….I think if you look at our statistics the raids on larger grows far outnumber the raids on smaller grows.”

He went on to explain that the Fortuna bust on September 6th that included the DEA and the US Marshall’s Office was “a finger of another much larger federal case that had splintered off of much larger targets.”  It was indicative of the kinds of grows he wanted to focus on.

The latest case which involved the 108 marijuana plants was “a case of anonymous tips” being worked by “our agents with the Drug Task Force.”  Apparently, there had been some complaints. As to the child being removed from her parents, he said, that the illegal wiring there was “such that there was a high possibility of not only fire but also electrocution.” He added, that the officers in the field in connection with the District Attorney’s office felt that the situation called for the additional charge of child endangerment. As to the relatively high bail, he said, “We don’t set the bail,” the District Attorney’s Office is in charge of that. According to Downey, electrical issues and child endangerment “upkicked the bail” though.

After noting that almost all indoor grows are determined by law enforcement to be fire hazards, Downey was then asked if, in the future, all indoor growers who were parents would be facing similar charges. Downey said that this was a case based on extremely hazardous wiring and wasn’t indicative of a policy change. He explained that there is a Drug Endangered Child Protocol that is standardized. This child was believed to meet the standard of an endangered child. “Not every case, I believe, meets that protocol,” insisted Downey.

The focus of the Sheriff’s Department, he said, remains the large commercial grows, those that are harmful environmentally. Nevertheless, this focus, he says, “doesn’t necessarily mean that what people perceive as mom and pop grows aren’t going to get busted” sometimes.