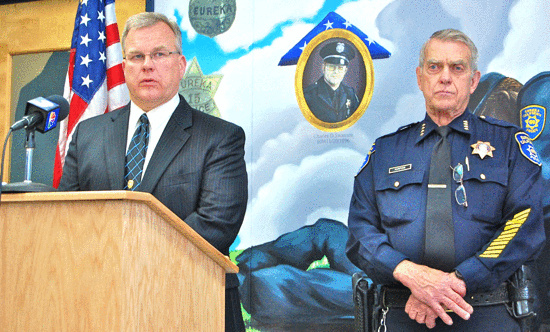 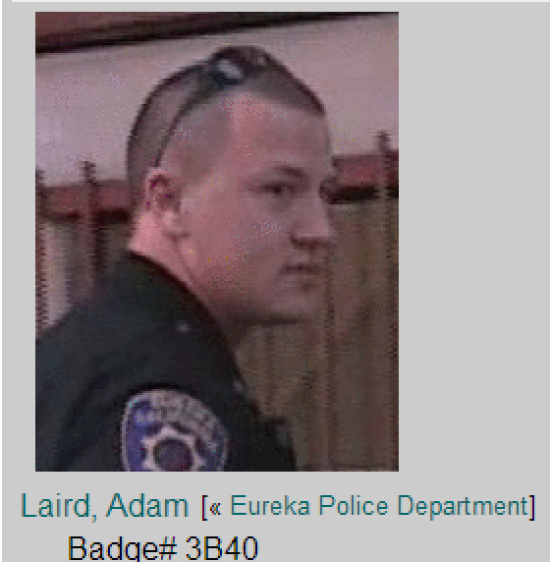 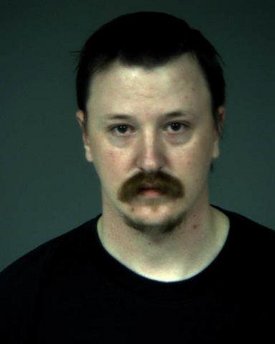 Harpham said that other EPD officers took Laird into custody this morning after a EPD-DA investigation that lasted several weeks. The incident in question took place a couple of months ago, Harpham said, and was brought to the department’s attention by another officer.

DA Investigator Mike Hislop said that Laird was booked into jail this morning, and has since bailed out. He is scheduled to be arraigned on May 29.

The EPD was not prepared to release much information about the alleged assault at this time on advice of the district attorney’s office.

Mayor Frank Jager and Eureka Councilmember Mike Newman were at the conference.

The warrant service was the culmination of a joint criminal investigation conducted by Eureka Police Department Detectives and Investigators of the Humboldt County District Attorney’s Office. The joint investigation was conducted after information had been received from a Eureka Police Officer about alleged criminal misconduct perpetrated by Sgt. Adam Laird. Sgt. Laird had his police powers suspended and was placed on administrative leave since incident was reported.

The investigation was initiated at the direction of Chief Murl Harpham. In accordance with inter-agency protocol, the Eureka Police Department notified the Humboldt County District Attorney’s Office and formally requested its assistance. Since this is an ongoing investigation no further information is being released at this time so as not to compromise the integrity of the process.

Sgt. Adam Laird was booked into the Humboldt County Jail and was released after posting bail.