Rain and Wind Cause Power Outages, etc. Across the North Coast 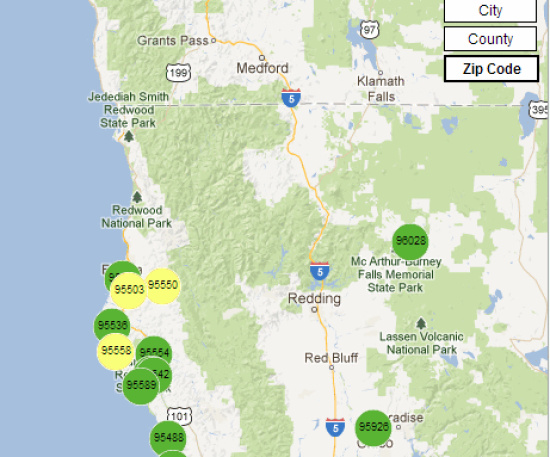 Screen shot of PG&E Outage Map at about 11 P.M. on Sunday night.

UPDATE 11:57 P.M.: According to a PG&E spokesman, 1785 customers are out in Redway and surrounding areas. The power went out at 10:32 P.M. when a tree fell into the roadway on the 3800 block of Redwood Dr. (which is near Dean Creek.)  Currently, there is no estimated time for power to be restored. “Well into the morning,” according to the PG&E spokesperson.  The tree must be removed and the line replaced which could take awhile, he said.

UPDATE 11:49 P.M.: CHP Dispatch is reporting a 75’ fir has fallen and its tip has closed the southbound lane between Garberville and Redway.

As wind and precipitation move across the county on Sunday evening, various weather related emergencies are keeping road and power crews busy. PG&E is reported out in multiple areas.  There are reports of power lines down at Fairway Drive in Eureka and a sparking transformer at Dean Creek may have caused power outages in Redway and Briceland. The cause has not been confirmed yet though many residents are reporting no power.

Residents from Eureka to Rio Dell are speaking of scattered hail episodes and areas of minor flooding. Hwy 199 was closed for a short time around 9 P.M. because snow had covered the road and a plow was needed to let vehicles back through.