Perseid Shower Arriving—Summer Fun with (or without) the Kids 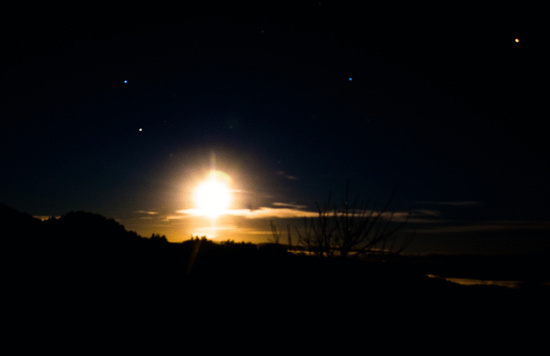 Moon and stars on another Humboldt night.

What may be the best meteor shower of the year approaches.  The Perseid Shower shows up every year at this time as Earth swims through the debris left in the wake of a comet. As the debris slips into our atmosphere it catches on fire.  This results in the silvery streaks we call shooting stars.

The best viewing will be late on the evening of August 11th (tomorrow) and early on the 12th. Also in The evening on of the 12th will also be good. The peak Perseid time is actually about 10 A.M. on the 12th but obviously that is a little light for shooting star sightings.

Because the moon is waxing (getting fuller) it will set early (a little after 10:36 P.M. Eureka time.) This will allow for relatively early viewing times.  Get your kids out for a campout.  Or if you live out of the fog, just pull up a lawn chair, grab a blanket and some popcorn, and let the little ones stay up for a late night adventure.

Hat tip to the National Geographic.