Did You Hear the One About the Pepper-Sprayed Eureka ‘Overpasses For Obama’s Impeachment’ Protesters? 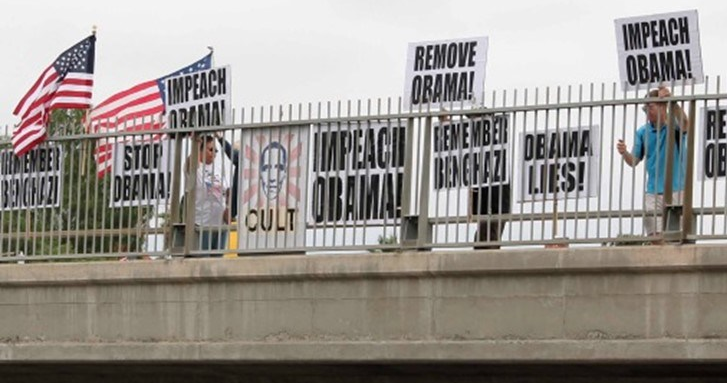 “Residents of Eureka, California are reporting of multiple arrests this evening during the wildly successful “Overpasses for Obama’s Impeachment” campaign … Early reports indicate that protesters were verbally and physically abused prior to being arrested. All 6 protesters taking part in the rally are currently in police custody. County and city officials in the area have not yet released a statement on the event or the names of those arrested. Communications have been difficult and local media outlets are scrambling for more details.”

OK. Your Lost Coast Outpost has received a few inquiries from readers over the last few days wondering why we weren’t reporting on the rumored dramatic incident chronicled above. The gist of what we’re missing and/or concealing: Sometime in the last week there was a showdown between law enforcement and protesters involved with the “Overpasses For Obama’s Impeachment” rallies that have been metastasizing across the country. The piece excerpted above, which can be found on conservative enclaves across ye olde Internet, relies on the eyewitness report of local Artie Campbell who was reportedly driving across the Samoa Bridge when a swarm of police cars flew past him en route to the peaceful protest. Tell it, Artie:

“I haven’t seen anything like it in my life. The protesters seem to have been minding their business and those police officers did not appear to be local guys.”

According to Artie, police ridiculed the group before arresting two older ladies, a teenage boy and three “heavier set middle aged white men.” Oh, and two of those dudes were pepper sprayed!

So yeah, why didn’t LoCO jump on this local arrest story like we do with virtually all others? Are you really still in suspense? Right. Because it didn’t happen. While this piece is making the rounds online, the source appears to be a site called NationalReport.net, a satire site that fancies itself the right-wing equivalent to The Onion. The piece is accompanied with the following image of, presumably, the teenager mentioned above being detained by, well, they don’t look like Humboldt County Sheriff’s deputies, but whatever. (Actual photo source.) 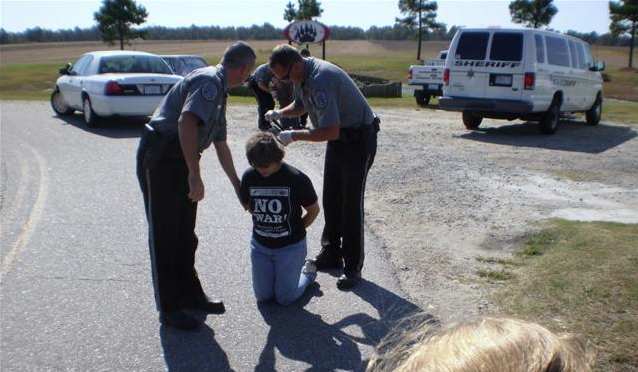 Get it? This is satire, you humorless lefties!

If you’d like to appreciate all the zingers contained in the article in question, as well as the endless stream of commenters having their suspicions about the coming Obama gestapo confirmed, click on over to NationalReport.net. Big fun.

Thanks for keepin’ ‘em honest, Artie.