Seven-O-Heaven: Smoke ‘Em If You Got ‘Em, Arcata »

DUI Allegedly Leads to Accident on 299

See CHP Dispatch for this here.

On July 16, 2013, at approximately 1634 hours, Rebecca Brooks was driving her 1990 Honda Prelude westbound on SR-299, west of Giuntoli Lane, at an unknown speed.  Brooks failed to negotiate the gradual right curve in the roadway and allowed her vehicle to drift into the grass center median.  Brooks lost control of her vehicle as it continued across the center median and into the eastbound lanes of SR-299.  Mr. Goodwin was driving his 2001 Chevy pickup on SR-299 eastbound in the slow lane when he was struck by the errant vehicle.  The Chevy came to rest blocking the eastbound fast lane of SR-299 and the Honda came to rest south of SR-299.  SR-299 eastbound was diverted off SR-299 at Giuntoli Lane for a short time until the Chevy was removed from the lane of traffic.  The occupants of the Chevy were transported by Arcata Ambulance to Mad River Hospital with minor injuries.  None of the occupants of the Honda were injured.

Upon investigation it was determined Brooks was under the influence of alcohol.  Brooks was placed under arrest and booked into the Humboldt County Jail.

UPDATED with below information at 9:57 A.M.: 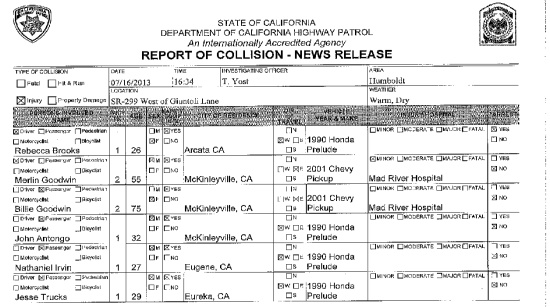