On 06-12-2013, approximately 12:45 p.m. a Humboldt County Sheriff’s Deputy driving a marked Sheriff’s Office pickup truck was driving eastbound on Highway 36 near the Hydesville Community Church when a black 1995 Ford Mustang with no license plate passed the deputy on the left over the double yellow line at a high rate of speed. The deputy attempted a traffic stop on the Mustang which continued eastbound. The deputy watched the Mustang attempt to negotiate the right hand turn at the Rohnerville Road, Highway 36 intersection at a high rate of speed. The Mustang slid sideways across the roadway again over the double yellow line into opposing traffic and nearly losing control of the car before returning into the eastbound lane again. The deputy attempted to stop the Mustang using his lights and siren, and the Mustang accelerated to over 90 mph in a 35 mph zone while again passing over the double yellow to pass another eastbound car. Due to public safety concerns the deputy terminated the pursuit after advising dispatch. 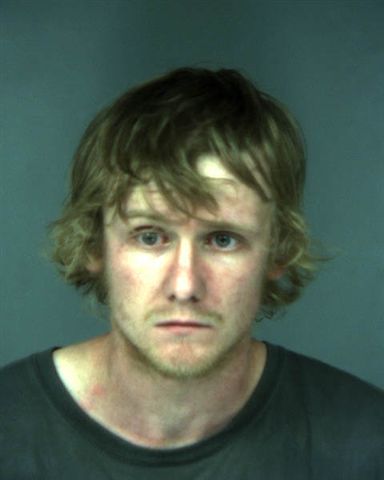 A Humboldt County Sheriff’s Office Livestock Deputy who happened to be in the Carlotta area heard the radio broadcast and saw the Mustang, which turned onto Barbershop Lane, Carlotta. The deputy witnessed the driver stop the Mustang behind 51 Barber Shop Lane, exit the vehicle and run away from it. The deputy lost sight of the suspect. The deputy then witnessed a delivery truck drive by on Barbershop Lane, heading towards Highway 36 with three people in it. The deputy saw the suspect was sitting in the passenger seat. Other deputies arrived in the area and stopped the truck. They arrested the suspect who had the keys to the Mustang in his pocket. The driver and the other passenger in the delivery truck (who were a husband and wife) were questioned. They told the deputies they were leaving a job site down Barbershop Lane when the suspect walked up and asked them for a ride. They agreed to give him a ride. They also said they never met him before they agreed to give him a ride. The suspect also told the deputies he had asked the delivery people for a ride. The suspect, who was identified as Chad Michael Lourenzo, 24 years old from Fortuna, told the deputies someone else was driving the Mustang, he was just a passenger in it and denied being the driver.