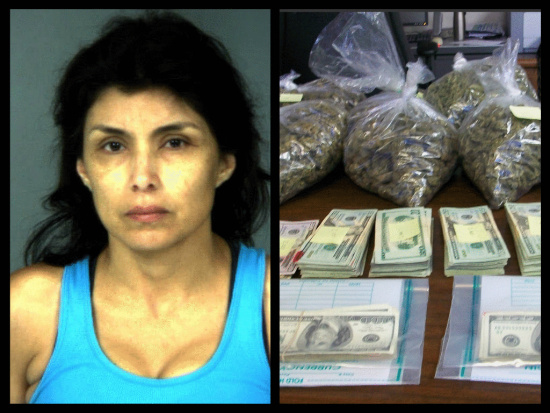 FORTUNA, CA - On June 16, 2013 at about 1030 hours, officers with the Fortuna Police Department were dispatched to the 400 block of 11th Street for the report of an altercation between Sheila Ayub of Fortuna (age 40) and her daughter. Upon arrival officers contacted the involved parties and were able to resolve the issues leading to the initial call for service. As an officer attempted to re-contact reporting party Ayub at her opened front door the officer observed Ayub running through the home while carrying bags of processed marijuana bud. The officer entered the residence and detained Ayub for the violation. Ayub was found to be in possession of approximately two pounds of processed marijuana bud, of which was packaged for sales.

Based upon the observations of the officer and Ayub’s statements, the residence was locked down in preparation for a search warrant.

During the execution of the search warrant, officers located the following;

Ayub was arrested and transported to the Humboldt County Jail on the following charges;