« This Week in Ocean: Shark Survivor, Kayaking Opportunity, the Right Way to Drive on the Beach 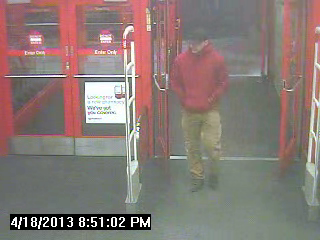 Scroll down for video of the suspect and of the crime being committed. Press release from the Eureka Police Department:

The Eureka Police Department is asking for assistance in identifying a suspect possibly involved in two robberies and one grand theft. The following is a summary of the crimes:

On Thursday, 4-18-13, at about 2100 hours, a suspect took 3 37” Westinghouse LED TV’s out through the emergency exit of Target in Eureka. The suspect fled in a small 4- door red Nissan with the license plate purposely concealed. The suspect was described as a white male, about 6’ tall, medium build, with brown hair. No force or threats were used by the suspect.

On Friday, 4-26-13, at about 2040 hours, a suspect entered Hana Restaurant at 2120 4th Street, ripped the cash register drawer from the register and attempted to flee the store. An employee interrupted the theft. The suspect was a white male, about 6’ tall, medium build with short brown hair. He wore large black sunglasses to partially block his face and he wore gloves. The suspect fled in a red 90’s model hatchback with the license plate purposely concealed. The suspect pushed and punched an employee in attempt to complete the theft. This use of force to complete the theft, turned the theft incident into a robbery.

On Saturday, 5-11-13, at about 2130 hours, a male subject entered Subway sandwich shop at 1906 4th Street, ripped the cash register drawer from the register and fled the store. The suspect was described as a white male, about 6‘2”tall, with brown/gray hair wearing an orange and green camouflage mask. The suspect fled on foot. No vehicle was seen. The suspect threatened to stab the employee if he tried to stop him from leaving with the cash register drawer. The use of threats turned the theft into a robbery.

The Eureka Police Department believes the three incidents were committed by the same suspect and request anyone with information in regards to the suspect, suspect vehicle or the location of the stolen property, to contact Detective Harpham at the 707-441-4305.