Come Walk the New Trail by the Bay: A Happy Review 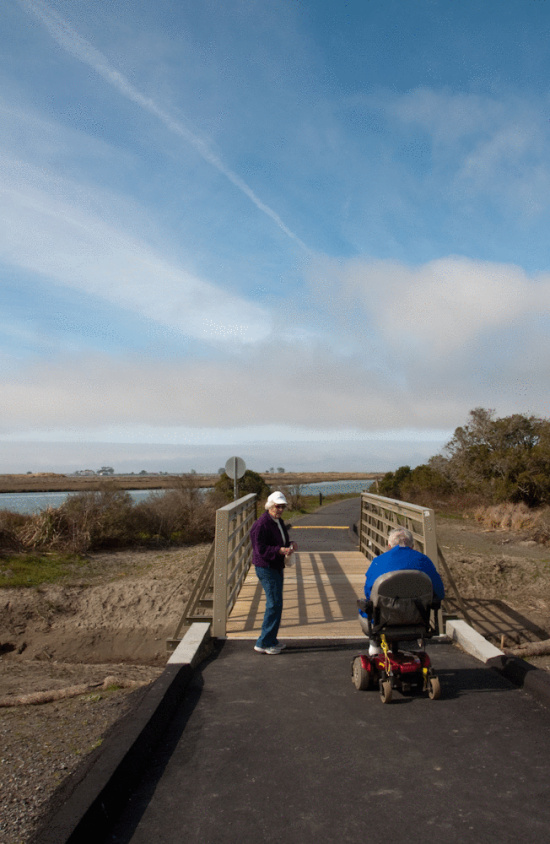 Sadly, most walkers can’t bring along these guides—two siblings (aunt and father of the reporter) who grew up in Eureka.

Yesterday, LoCO had the chance to review the new multi-use Elk River-Hikshari trail in Eureka. We wanted to know “Is it really multi-use?” and “Is it going to provide a place for all parts of the community to access the beautiful area surrounding Eureka?” Photo essay follows on the joys of the trail and a few possible problems.

Today, from 2-4 P.M., is the grand opening. Go to where Truesdale Ave. reaches the Bay for the festivities.

The walk can start either behind Ray’s Food Place or off of Eureka’s Park and Ride on the extreme outskirts of the south part of the city. The area leading down from the Park and Ride is slightly steep and might prove difficult for a very few but neither the wheelchair user nor this out of shape reporter had an issue.  As for my over 80 aunt—-she had to slow her normal pace for us.

The word Hikshari is the Wiyot name for the area. The trail provides a look at some of the landscape that the native people might have seen but it also includes views into the historical city of Eureka right up to modern times. The trail is about 10 foot wide more or less. It starts alongside 101 but quickly curves towards the Bay. To the right is a battered old green gate off of Pound Rd. that leads to a private business.  Next is a lovely pond somewhat marred by chain link fencing but much of it still can be seen without difficulty. (See below.) 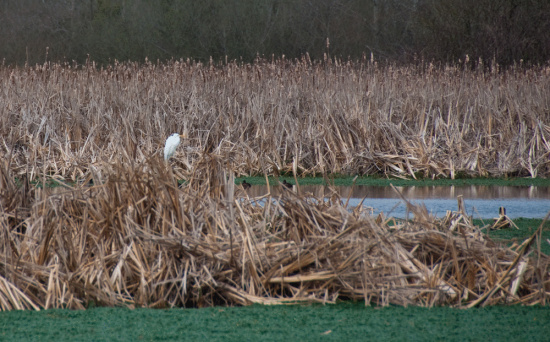 Next, to the right, is the site of the old Tallow Works which was used to render dead animals and was considered quite smelly by the residents.  The building was ordered taken down in 2007 but a few small, dilapidated sheds remain. 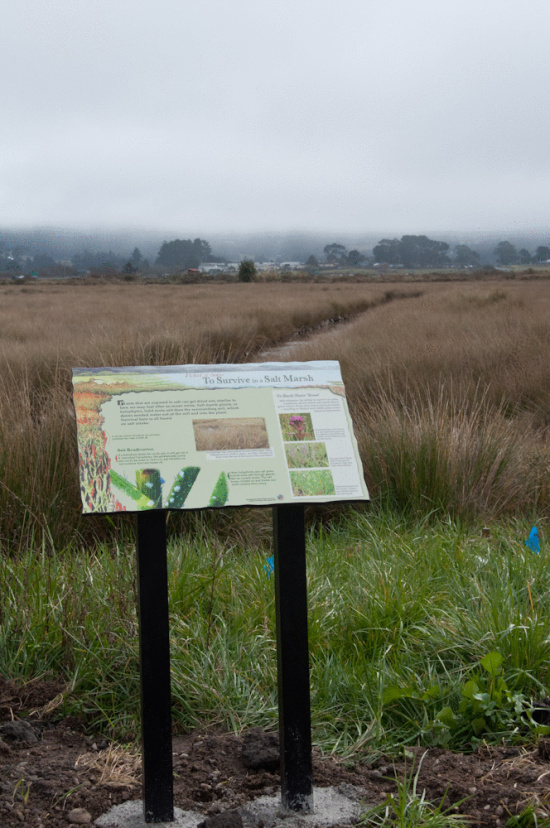 Above is a photo showing the area off to the left along with one of the frequent signs explaining details along the walk.

The smooth, wide pathway curves around the old Tallow Works and follows the Elk River north. A long sandy beach is easily accessible for most. (See below.) 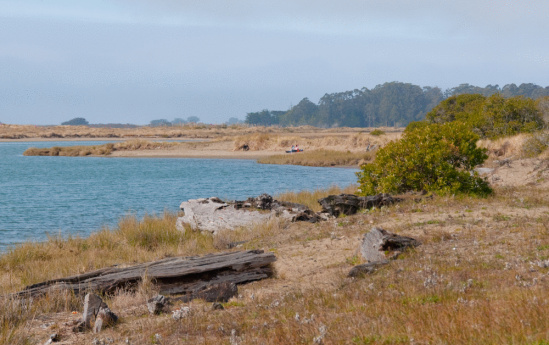 Soon, the trail moves north parting a wall of foliage on either side like Moses moving through the Red Sea. Intriguing unpaved paths ramble through the undergrowth and tiny swamp-like waterways occasionally can be seen on either side. The place was immaculate but the homefree folk might make camp here in the future as it is easily accessible and yet offers quite a bit of privacy off the main path. 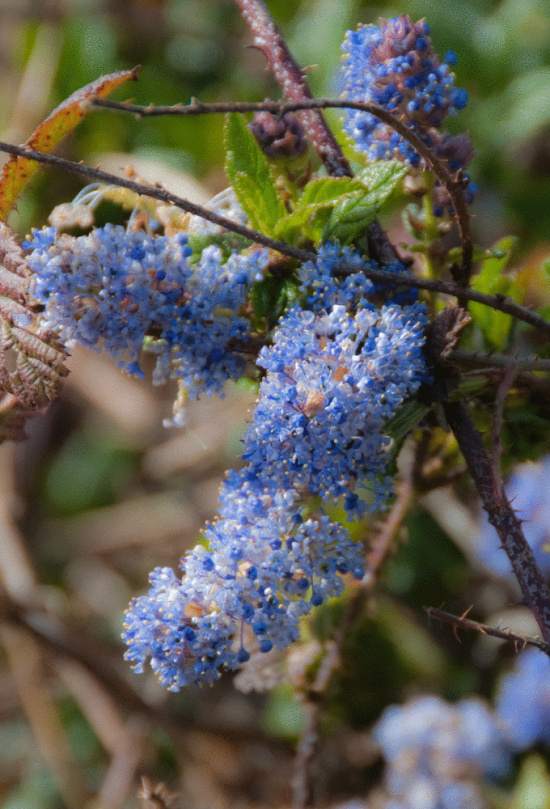 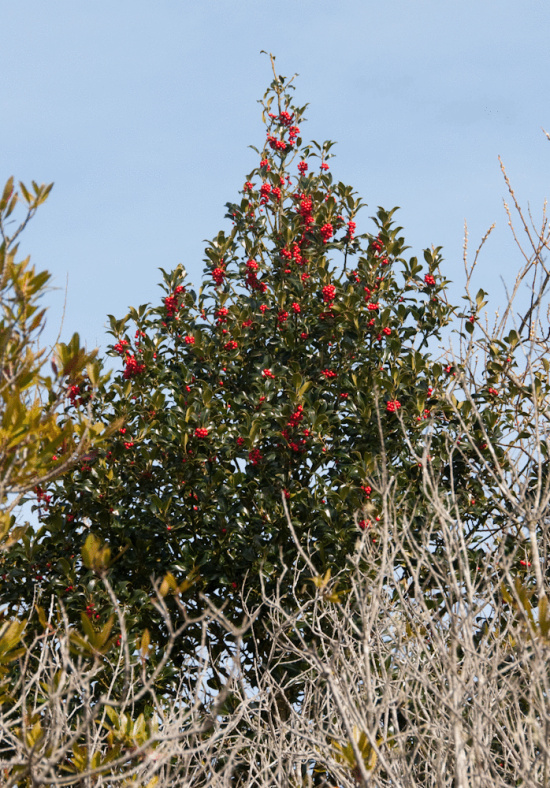 Not long afterwards, the trail slips from the wall of lush foliage to move beside the Elk River again. The wide open sky and low lying land gives expansive views of vast swaths of birds circling, flying and swimming.

The trail has another street access at this point near the Greater Eureka Area Wastewater treatment plant off of Hilficker Ln.  Yesterday, there was a pile of soil across the path that made wheelchair maneuvering somewhat tricky but still doable. There are signs of workers at this access point.  There are several unfinished signs and raw places in the foliage that look as if more is being planned.

Immediately after this, on the right is the Humboldt Bay Fire Safety Training Center. This would be a great favorite with youngsters especially if they were lucky enough to see it when in use. 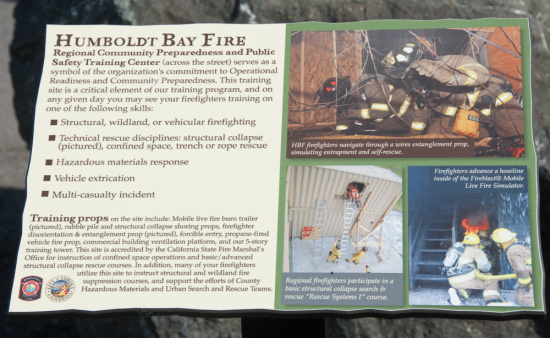 Above the sign at the site and below firemen planning for our safety and theirs. 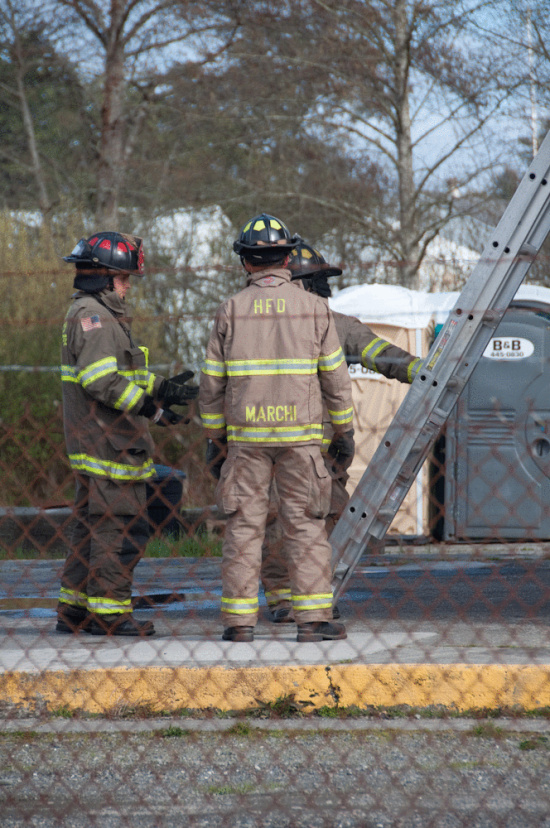 Along the path are wildflowers and, as spring advances, there will be more! 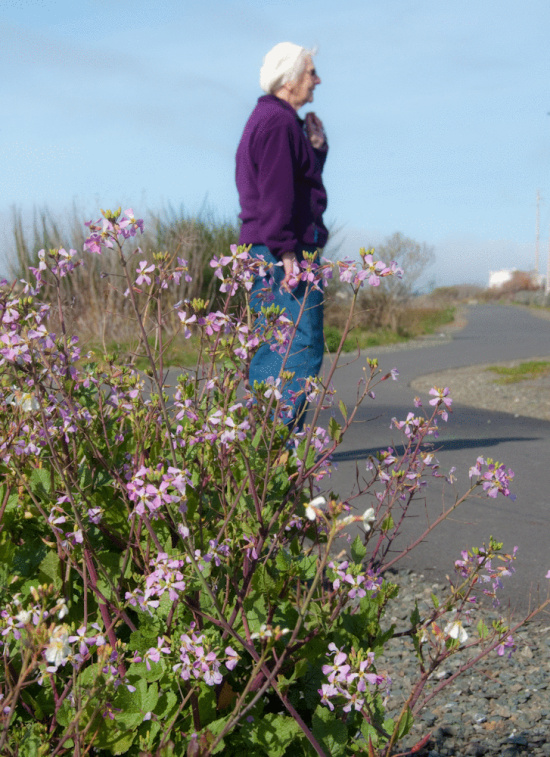 These old trusses puzzled my two guides.  One remembered wading through the river south of here to access the far bank—why would he do that if this was a bridge of some sorts.  Anyone know what it was? 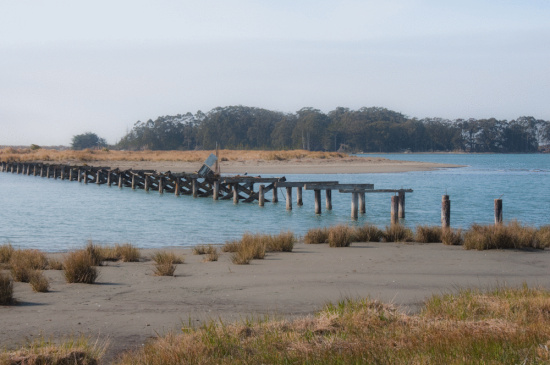 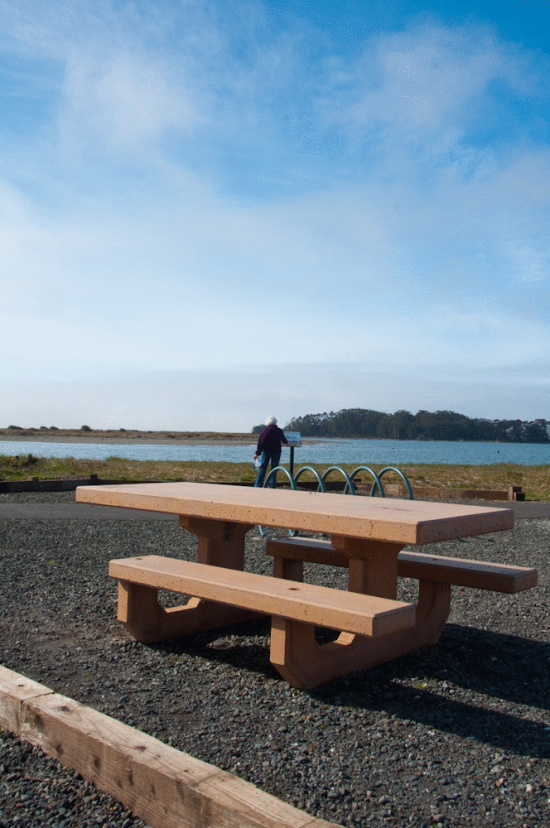 Truesdale Vista Point behind Ray’s Supermarket is the final spot on the trail.  There are bathrooms and benches and signs. This is the most populated spot on the trail. However, there were a variety of users all along the path.  On the day I was there, I saw joggers, dog walkers, children, moms with strollers, bicyclists (including a one legged woman that inspired me) and a couple of homefree types as well. 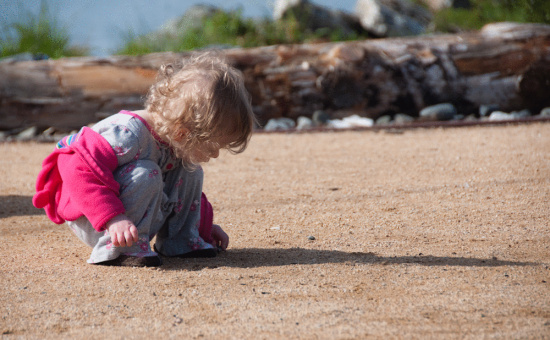 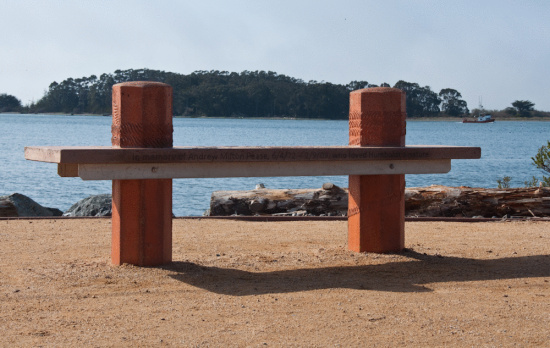 Beautiful bench facing a restful scene. The details on these signs and benches are quite lovely.  The seashells embedded in various places added a distinct charm. 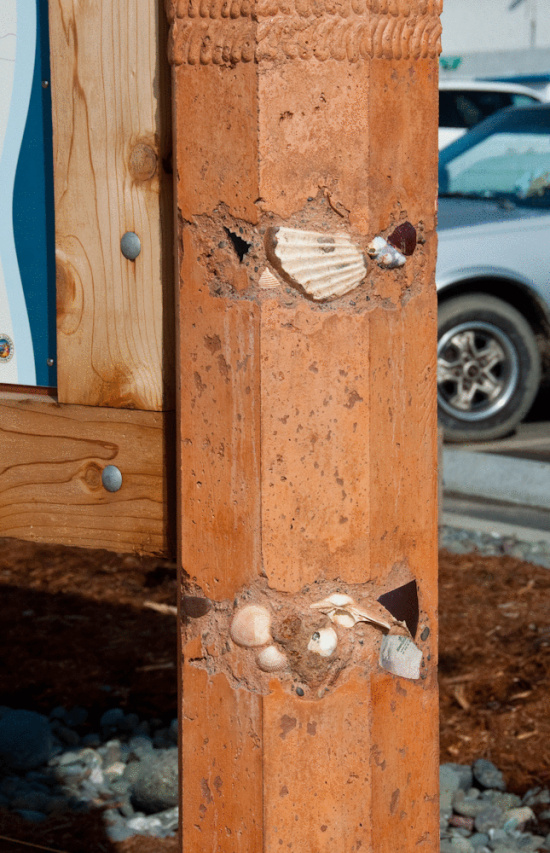 The roughly three mile round trip hike was so easy to navigate that LoCO recommends it for anyone. This is truly a multi-use path. Bring cameras because the views are exquisite.  This is a hike for anyone needing to shake the city out of their soul and navigate the edge of the wild while still remaining comfortably close enough to civilization to satisfy those not willing or able to venture further out. 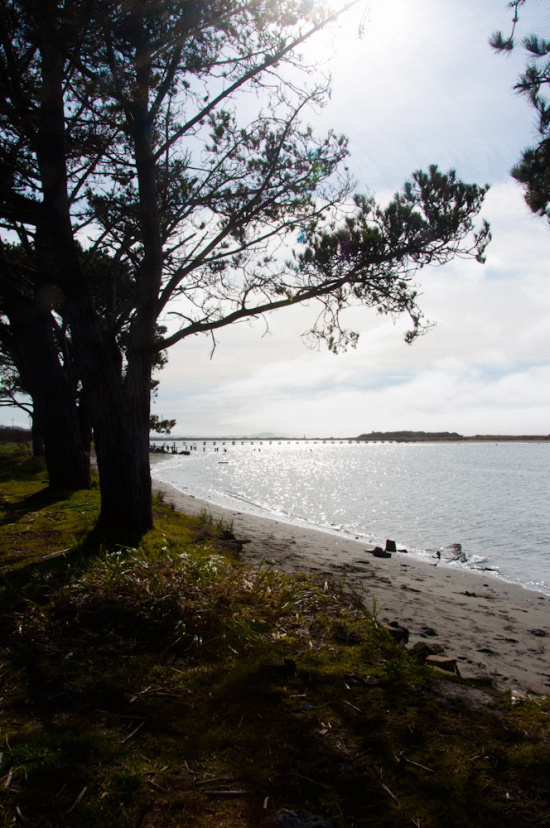