Letter from Istanbul: A Nevruz Peace 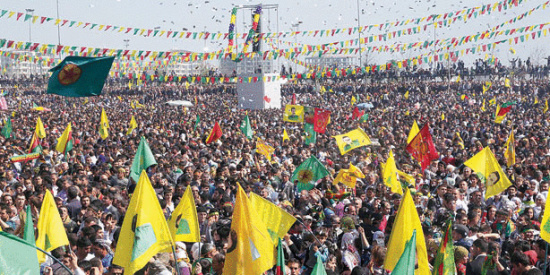 I remember a year or so ago, on a late summer afternoon, a friend of mine, Cees, and I decided to take a ferry over to Sultanahmet and have a look inside the Istanbul Museum of Science and Technology of Islam. We spent several hours browsing the sun dials and maps and ancient scientific instruments.

What I remember about that day is how quiet, sunny it was in the morning. Cees, a student from Holland, had suggested going to the museum. On our way to the ferry boat station in Kadikoy, we noticed a demonstration was gathering. As we read later on, it was a gathering of the Kurdish Peace and Democracy Party (BDP), who had organized for World Peace Day.

Lots of police were on hand, as they usually are at such gatherings. Cees and I were anxious to go about our day, so we didn’t stop to watch.

Maybe we were lucky that we didn’t. The day turned out to be anything but peaceful. When we returned from our visit to the museum several hours later, the streets just outside the ferry station, where all the buses gather, looked like a warzone. Rather, it looked like the aftermath, a sort of municipal autopsy.

All of the kiosks, the little cafes and shops were shut. The glass of all the bus stops had been smashed. Broken glass was everywhere, and the atmosphere of that sunny Sunday afternoon was punctured, wounded, electric.

“What the hell happened?” we asked each other. Later, of course, we found out. The peace rally had come just weeks after fresh bombing by Turkish forces on Kurdish rebels in the east of Turkey. During the demonstration, Turkish police had objected to some of the signs posted by demonstrators. There were clashes, and at one point some masked men reportedly began hurling rocks at the bus stop glass.
Back at the flat, one of our other friends, a German student, witnessed some of the uproar.
“There was a great crush of people,” he explained. He was still shaken, and he shook his head in a dizzy, breathless way as he talked. “Everyone was pushing. I managed to climb a fence and get out just as things really started to get crazy.”

Even to a hopless yabancı like me, it is clear that the Kurds play an enormous role in the day-to-day life of this city, and this country. In Istanbul, they are as much a part of the fabric of the city as the ancient city walls. They work mainly in menial labor; in the shops, in the cafes and restaurants, driving taxis, in construction, but still others serve in high government posts. Many popular singers, such as Ibrahim Tatlises, are also of Kurdish descent.

As a foreigner, you often feel insulated from the tensions, the issues, that shape, even define the relationships between Turks and the ethnic minority Kurds. It’s sort of like the racial tensions that you find in America. Most of the time it’s seemingly invisible, and people co-exist and go about their day-to-day lives. But every now and then, something happens and the tensions boil to the surface, or, as in this case, erupt in violence.

Fortunately, no one was killed that Sunday afternoon. But it’s one of those days that drives home the fact that you are living in a very volatile, tempestuous part of the world. And this was even before things really began to get out of hand in Syria, just over the border.

Anyway, enough drama. Now for some good news. This past week, the outlawed Kurdistan Workers Party (PKK) announced a cease fire and an intention to withdraw its fighters from Turkey. The cease fire was called for by jailed PKK leader Abdullah Ocalan on the eve of Nowruz, the Iranian-Persion New Year. Called Nevruz in Turkish, the day is also recognized by the Kurdish people.

Scanning the Turkish press, most here seem to be optimistic, even though there have been similar cease fires in the past. “The Winds of Peace,” reads one headline; “A New Era,” reads another, “Diyarbakir’s Changing Skyline,” goes yet one more.

“Despite the shortcomings and unclear points,” writes Cihan Çilek,” in the Hurriyet Daily News, “peace seems nearer than it ever has been and it will be the next steps, that are perhaps already awaiting the final touches of the government and the PKK, that will bring the real peace and long-needed reconciliation.

“I don’t like the PKK, said one of my drivers, who is Kurdish. He welcomed news of the Nevruz cease peace announcement.

As they say here, Inşallah. One can only hope so.

James Tressler was a reporter for The Times-Standard. His work has also appeared in The Prague Post . His books, including “Conversations in Prague,” and “The Trumpet Fisherman and Other Istanbul Sketches,” are available at Amazon.com. He lives in Istanbul