The Battle for the Little Lake Valley: Debating the Willits Bypass, Pros and Cons (Part III of III) »

The weekend of July 19th through the 21st a new festival rivaling Reggae on the River will be happening at the Cooks Valley Campground.  Some neighbors are less than thrilled and are asking for others with similar concerns to contact the Mencocino County Planning Dept. to protest the permit.

The event is being promoted as “a 3-day camping, music & arts festival + local craft beer & wine, visual experience on the Eel River”  though the lineup has yet to be announced. According to the public notice, 3500 people are projected to attend.

Neighbor Patrick Dowd says that the event came out of the Cooks Valley Campground after hours Reggae event. He describes prior events as being very loud and running over the permitted time into the early morning hours. He says that he and his partner live only two parcels away and find the noise extremely disturbing.

He says that he has been offered tickets motel rooms to leave but “We can’t leave; we’ve got pets and livestock.  When you’ve got 3500 people right next to you, you don’t want to leave.”  He describes a trespasser being arrested on his land during an earlier event and  says, [The event] is really loud and obnoxious.  It is non stop music for 72 hours.” The noise, he says is torture.  He likens the situation as to what law enforcement did to the David Carresch compound at Waco.  He says, “They used sonic torture devices which was basically a lot of Rave music.”

He said he spoke to the owner of the land as was told to “get on board or get run over.” LoCO was unable to get hold of Keith Bowman in the short amount of time before publication.

He also says that he has tried to go through the Mendocino Planning Dept. to mitigate the issues. “Last year we had conditions that would have him turn off the music in time.”  But he says the production company did not comply. But instead of shutting down the event for this year, Dowd complains, that the production is going ahead under a different production company—Black Blap Productions. The Mendocino Planning Dept. official in charge of ther permit did not return LoCO’s email asking questions about the event.

He also expresses concern for the health of the Eel River to have two major events on it during this low rain year.

Written comments should be submitted duleyd@co.mendocino.ca.us no later than May 16, 2013. Oral comments may be presented to the Zoning Administrator during the public hearing which is on May 17th at 10 A.M. Friday, May 17, 2013, at 10:00 a.m., to be held in the Planning and Building Conference Room, 501 Low Gap Road, Ukiah.

[An early version of this story was inadvertently missing some information.  The last paragraph has been added and corrections made.] 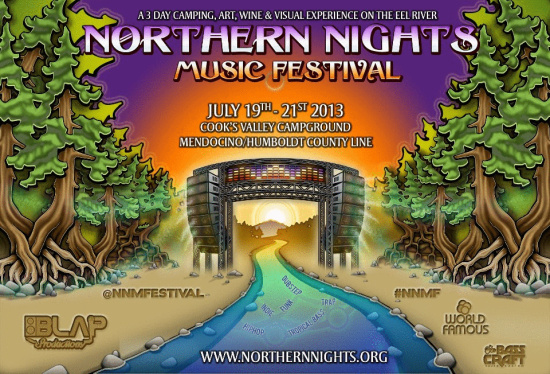