Showdown Over Airport Budget at Tomorrow’s Board of Supes » 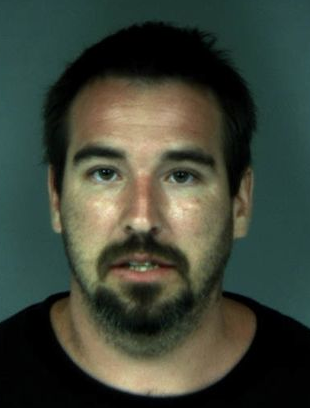 On 05-04-2013, approximately 9:20 p.m. the Humboldt County Sheriff’s Office received a 911 call regarding some type of road rage incident two to three miles past the Harris-Alderpoint Junction on Alderpoint Road, Alderpoint. Humboldt County Sheriff’s Deputies and California Highway Patrol Officers responded to the scene. When they arrived they spoke with the victim, a 28 year old male from Alderpoint. The victim told the deputies he was driving a U-Haul truck when he became involved in a traffic accident with a 2011 white Toyota Tacoma Truck, rear ending it. After the accident the victim reported seeing the male passenger (later identified as Terry Robinson) in the Toyota truck exit the truck carrying a silver colored metal pipe, approximately four feet long and three inches in circumference in his hand. Robinson approached the driver’s door of the U-Haul truck as the victim was attempting to exit the truck. Robinson began striking the victim two to three times on the right side of his arm with the pipe. The victim retreated into the truck and closed the door to escape the attack. Robinson then struck the truck several times with the pipe and shattered the driver’s side window of the truck. The victim called 911 to report the attack. The victim had injuries to his arm consistent with being stuck by a blunt object, and the U-Haul truck had damage including a smashed in drivers side window. The victim denied medical attention.

Deputies spoke with Terry Michael Robinson, 31 years old from Eureka who was still on scene. Robinson admitted to having a pipe, but denied striking the victim with it. Robinson told the deputies it was for protection because he believed the U-Haul intentionally ran into the Toyota Truck he was in.

Deputies arrested Robinson for assault with a deadly weapon and transported him to the Humboldt County Correctional Facility where he was booked. His bail was set at $50,000.00