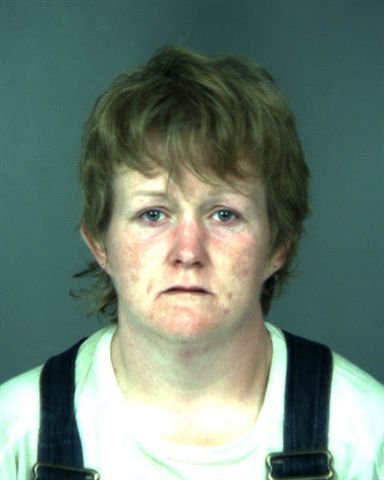 On 05-07-2013, approximately 10:00 a.m. the Humboldt County Sheriff’s Office received multiple 911 calls from citizens who told the dispatchers a female and her boyfriend were fighting Deerhorn Trailer Park, 2700 block of Highway 254, Phillipsville where the altercation was occurring. While the dispatchers were on the phones with the citizens they were told the female had left, but then returned to the residence and was now hitting the male with a claw hammer.

Deputies and medical personnel were dispatched to the scene. When the first deputy arrived at the residence he heard a male screaming inside, “She is still hitting me”. The deputy attempted to enter the home after announcing his presence; however the front door was locked. The deputy then kicked open the door and shoved his way into the residence. The female suspect had shoved a couch in front of the door to block law enforcement from entering the residence.

Once inside he witnessed the female suspect, later identified as Jessica Ann Darsch, 31 years old, was beating her 32 year old live in boyfriend with her fists. The boyfriend was covered in blood and was holding their 20 month old female child. The deputy immediately grabbed and subdued Darsch who fought with the deputy’s attempt to handcuff her. After the deputy handcuffed Darsch, medical personnel entered the residence and began treating the victim who had been struck in the head, arms and hands with the hammer.

The victim told the deputy that he and Darsch got into an argument and she began hitting him with her fists and a hammer. He said she was holding their child while she was doing this. Darsch was arrested for assault with a deadly weapon, domestic violence, felony child endangerment and resisting arrest. She was transported to the Humboldt County Correctional Facility where she was booked on those charges and on an outstanding domestic violence arrest warrant. Her bail is set at $75,000.00. The male victim was transported to a local hospital where he was treated for his injuries. He is expected to fully recover. The child was not injured. Child Welfare Services was notified and authorized the child to be watched by a neighbor until the father can take custody of the child.