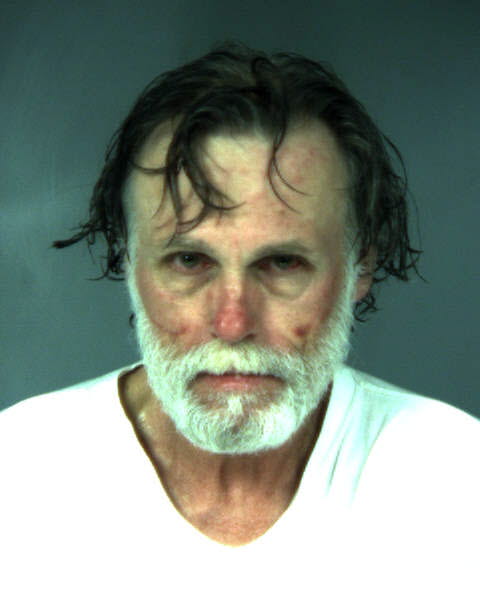 On November 5, 2013, at approximately 11:41 AM, Eureka Police Department officers were dispatched to a reported fight with weapons (rocks) in the vicinity of 5th and T Streets, Eureka. Upon arrival, officers found 51-year-old Charles Knight of Eureka (a transient) being detained in the street by two males. Knight was bleeding from various minor abrasions and being restrained by the men on the ground. Officers subsequently learned the following after interviewing multiple victims and witnesses.

The victims, a husband and wife with their young grandson, were parked in their pick-up truck at a fast food restaurant on 5th Street when Knight approached the husband at his driver’s door. Knight attempted to sell the husband marijuana but was told “no.” Knight then went around to the passenger side of the vehicle and attempted to sell marijuana to the wife. He was again told “no” and to leave.

Knight proceeded to approach another woman in the parking lot and offer to sell her marijuana. He was rebuffed again. Knight returned to the victims’ vehicle and approached the wife at her window once more. Having had enough of his behavior, the wife opened her door into the suspect and told him to go away. Knight responded by hitting her with a brown shopping bag he was carrying. He also threw an unknown substance on their vehicle. Knight then proceeded to pull his pants down, expose his genitals to the wife and grandson, and fondle himself in front of them.

The husband confronted Knight who fled on foot southwest across 5th Street. The husband drove after Knight in an attempt to make a citizen’s arrest. After temporarily losing sight of Knight, the husband left his vehicle and searched for him on foot. He found Knight hiding in an alley behind a sporting goods store on the 1600 block of 5th Street.

Knight reportedly again exposed his genitals to the husband. With the husband in pursuit, Knight ran back across 5th Street and into the Burger King parking lot. Around this time, he armed himself with a large softball-sized rock. The husband was joined by two other uninvolved adult males who decided to assist him in detaining Knight. Knight ran back across 5th Street now pursued by all three males. Knight brandished the rock at his pursuers and threatened to kill them. They caught Knight at 5th and T Streets, took him to the pavement, and restrained him.

One of the males assisting the victim then proceeded to kick Knight once in the head. He then left the area. Knight received only a minor abrasion from this unnecessary use of force. The 39-year-old “vigilante” was subsequently located and detained by officers nearby. He was later released pending review for assault charges by the Humboldt County District Attorney’s Office.

Officers located a small quantity of marijuana on Knight’s person (less than one ounce).

Knight was subsequently arrested and transported to the Saint Joseph Hospital Emergency Room for precautionary medical evaluation and treatment. Once cleared medically, he was transported by officers to the Humboldt County Correctional Facility where he was booked for felony criminal threats, assault and battery, indecent exposure, and attempted sales of marijuana.