« Too $hort is $orry, Humboldt, But He Will Not Be Here $aturday (VIDEO)

Arcata Faces the Music: Special City Council Meeting Tomorrow on Payback of $4.5 Million in Funds Misappropriated From the State 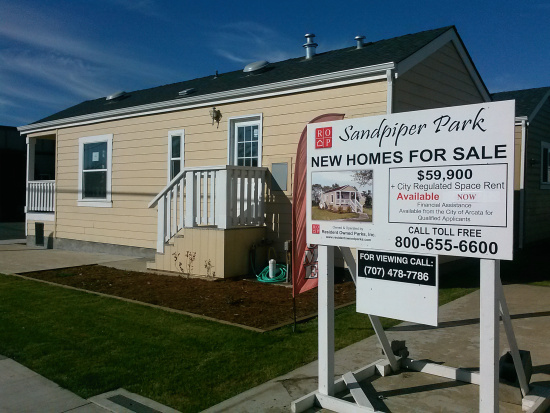 Sandpiper Park: The bulk of the $4.5 million misappropriated from redevelopment went to fund this low-income housing development.

The Arcata City Council is calling a special meeting tomorrow morning at 8:30 to deal with the ever-increasing threat of a “clawback” of millions of dollars misappropriated from the state of California when the state closed down all local redevelopment agencies in 2011.

Under pressure from the California Department of Finance, which is threatening to withhold sales and property tax collected within the city limits, staff is asking the council to approve a 10-year repayment plan that will take $300,000 annually out of the city budget until the year 2025.

As shown in an excellent Arcata Eye article from Dec. 2012, most of those funds went to the Sandpiper Park project on South G Street — the conversion of an old and ratty mobile home park into inexpensive houses for low-income people. (Helen Sanderson wrote about the genesis of the deal for the North Coast Journal in 2006.) Smaller pockets of redevelopment money went to the Plaza Point senior housing project near the Co-op and various planning and streetscaping efforts.

When the state came calling to get its money, the city put up a massive fight, insisting that it acted properly and would not have to return the cash. In the meanwhile, the Department of Finance decided to scrutinize the books further, eventually adding another $2 million to the amount it believed it was due. (Hence the inflation from $2.4 million in the headline of that Dec. 2012 Eye article to the $4.5 million the city will be talking about tomorrow.)

That fight has been lost. Tomorrow, the city will either follow the staff’s recommendation to face the music and encumber the city budget for the next decade, or else it will face massive repercussions from the state — the draconian garnishing of the tax revenues that keep the police, fire and other essential city services funded.

You can get the agenda for tomorrow morning’s meeting, as well as submit comments to the council, at this link. The staff report comes in two parts — one to the City Council proper (here) and one to the “successor agency” to the former Arcata Redevelopment Agency (here), which is essentially the City Council in different form.

Note: Former Arcata Mayor, Arcata City Manager, State Senator and North Coast Railroad Authority Executive Director Dan Hauser serves on the board of directors of Resident Owned Parks, developer of the Sandpiper and recipient of the lion’s share of the misappropriated funds. Hauser said some colorful things about the “low-level bureaucrats” who now seem to have won this war in that Arcata Eye article. Those words are worth revisiting.