The Humboldt Bay Maritime Museum Would Like To Save a Really Old Boat, Needs $$$ »

Anyone who has visited Orleans for any length of time knows about the dismal state of Internet service in the town. You’re either on an expensive satellite connection or you’re on dial-up.

Meanwhile, just across the line into Somes Bar, the good folks at Siskiyou Telephone run screaming fiber practically to their customers’ doorsteps. There have been various efforts to extend Sisqtel’s badass DSL to their Humboldt neighbors, but all have fallen to the extreme obstinancy of Verizon, which holds the franchise over much of northeastern Humboldt.

Well, looks like the Karuk Tribe is now poised to do the job Verizon never did — and much more besides. The staff of the California Public Utilities Commission is recommending a “yes” vote on the tribe’s $6.6 million grant application, which would lay new fiber in a big loop eastward from Humboldt Bay to Orleans, hitting the communities of Trinidad, Orick, Weitchpec, Johnsons and Wautec along the way, and then completing the loop by jacking into Sisqtel’s network. Yet more redundant fiber to Humboldt Bay.

The PUC is set to approve the application at its Oct. 17 meeting in Redding.

According to the staff report — download it here — the whole project is expected to cost a little over $12 million. The Karuk and Yurok Tribes are pledging to kick down the balance. Once it’s in, the (approximately) 664 residential customers directly along the project’s path can sign up for broadband service for as low as $30 per month. Fire and police agencies along the route will also get hooked up.

It sounds like a few number of customers, but Eric Cutright, the Karuk Tribe’s IT director, says that no one knows exactly how many people live within range of the service area of the new ISP that the tribe — in conjunction with the Yurok tribe — will form. They’re using official census numbers for the purposes of the grant application, but it could be that the thing will reach far more households.

Cutright explained that the tribe’s new ISP will reach customers in the rugged hills throughout the region through a series of wireless networks — simple 802.11 WiFi technology for customers in town, microwave and TV whitespace signals for those further out.

If you’re in the affected area, you might want to make your voice heard on this one. The CPUC is taking comments on the project until Oct. 7. Detailed instructions for submitting comment can be found here. 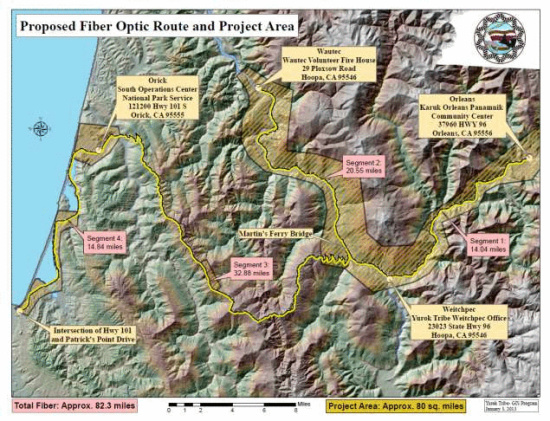