UPDATE, 1:51 p.m.: The News Channel 3 Facebook page is reporting that the victim in this weekend’s accident was 26-year-old Tommy Ricardo Ruiz of Eureka. 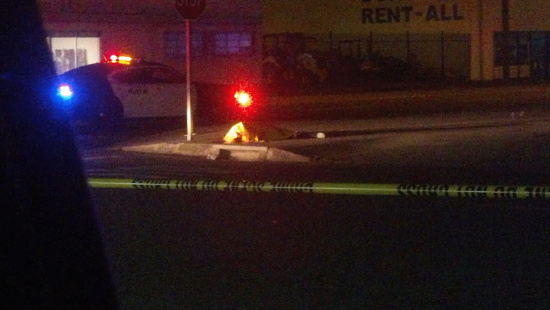 According to the Eureka Police Department (EPD), there was a fatal motorcycle accident at Broadway and Grant around 12:30 a.m. today.

An EPD officer saw a motorcycle heading northbound at a high rate of speed. The officer estimated the speed to be over 80 miles per hour in a 30 mph zone.  Traveling in the left-hand lane, the motorcyclist passed the officer who was also traveling northbound but in the right-hand lane. The officer radioed in the observation of the high speed, but, fearing to push the motorcyclist to even higher speeds, did not attempt to stop the driver.

The motorcyclist was pronounced dead at the scene.

There were multiple witnesses to the collision. The Volunteer Patrol provided traffic control as the northbound lanes of Broadway were closed for an extended period of time.

If anyone has any information about the situation contact Eureka Police Officer Tim Jones 441 4060.

On April 20, 2014, at approximately 12:35 AM, a Eureka Police Department officer on patrol was driving northbound in the #2 lane of Broadway Street just north of Wabash Avenue when he was passed by a blue and white Honda motorcycle traveling at a high rate of speed in the #1 lane of northbound Broadway Street. The officer estimated the motorcycle was travelling in excess of 80 MPH as it entered the 30 MPH zone there.

The officer broadcast his observations of the reckless motorcyclist to Dispatch but did not take any enforcement action out of concern it would only prompt the rider to further increase his speed.

As the officer continued driving northbound, he saw the rider lose control of the motorcycle at around the 1000 block of Broadway. The rider fell off his motorcycle and struck the raised curb at West Grant Street and Broadway. The motorcycle continued north and collided with a closed garage door at 939 Broadway, breaking through the door.

The rider suffered fatal injuries from his collision with the curb and was pronounced dead at the scene. EPD Traffic Unit officers were called to the scene and assumed the investigation. Members of the Eureka Volunteer Patrol (EVP) also responded to assist with traffic control and scene security.

The name of the motorcyclist is being withheld at this time pending notification of his family.