Accident Near Harris and H Street Sends Driver to Hospital » 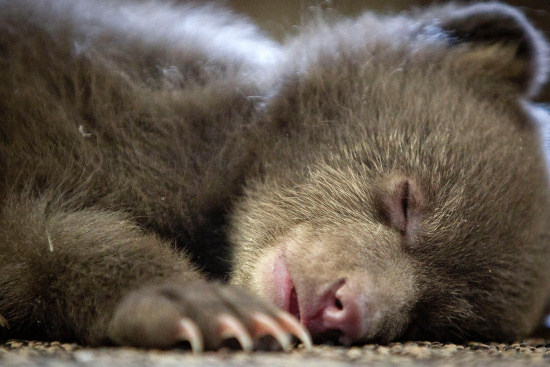 Tahoe, the tiny cub who has been charming much of America the last two weeks, takes a nap. [Photos of Tahoe, courtesy of the BEAR League.]

As we’ve been celebrating the hatching of our eaglets, another Humboldt baby has been gaining fame without our knowledge.

About 12 days ago, a tiny orphan cub, placed anonymously in a kennel belonging to an organization near Lake Tahoe dedicated to helping bears, might have faced life in a zoo due to regulations that require the rehab facilities to either release orphaned animals within 75 miles of where they are found or not release them at all. The lack of information about where the little bear had originally been discovered would have prevented her release into the wild. However, apparently, the man who found Tahoe, as the cub has since been named, contacted the BEAR League yesterday and identified the area where she was found next to her dead mother as…..our very own Humboldt Redwoods State Park!

Ann Bryant, Executive Director of the BEAR League, said she discovered the six to eight week old cub on April 15th. “I found her out in the driveway of our office in front of our garage,” Bryant explained. “She was in one of our kennels. She was very small and slightly dehydrated [but] not dangerously so.”

Bryant immediately called a rehab facility located nearby that was able to provide bear milk formula which she said is “distinct” and not easily found.

Officials at the Department of Fish and Wildlife (DFW) were contacted. According to Bryant, they eventually informed her that, if the location of the cub when it had been found in the wild couldn’t be determined, Tahoe would have to be sent to a “permitted facility” as cubs need to be released within 75 miles of where they originally were located. (See here for Dept. of Fish and Wildlife guidelines. Scroll to bottom.)

“Unless we could figure out where she came from,” Bryant worried, “[Tahoe] would be put in a zoo.” There had been no note left with the tiny bear and no means of contacting the anonymous person who had brought her to the organization.

“We knew that we really had to find out where she came from,” Bryant said. As media organizations picked up the story, Tahoe’s rehab crew hoped that the person who found her would call and tell them where she had been discovered. Day after day went by and no one contacted them with information. “We were really feeling like she would come to a bad end,” Bryant explained.

But then yesterday, a man called and asked how the little cub was doing.  Eventually, it became clear that he was the one who brought her to the BEAR League. “I had to make sure,” Bryant said so she asked multiple questions about where the bear was left, what items had been left with her, what was the color of the blanket found with her, etc.  “He answered every single question perfectly,” she said happily.

The man told Bryant that he had found the tiny cub crying and cuddling on her dead mother. According to Bryant, the man was in a remote area of the Humboldt Redwoods State Park when he found the pair. He left and went to an area where he could get good cell reception. There he called someone in authority who told him to leave it and let nature take its course.

“This man could not do that,” Bryant said. “He picked her up and hiked out of there and did not know what he was going to with her.” Eventually, he got home and gave the cub some milk in a bottle.

This apparently wasn’t good for Tahoe. “Baby cows drink cow’s milk. Bears don’t,” Bryant said ruefully. At this point, the man, who did not want to be identified, did some research. He found out about the League, kept the cub with him overnight and “came up here hoping that no one would see him,” Bryant explained.

Bryant said, when he got to the League’s office, the man saw the kennels kept in the yard, put the little cub in one and left hoping that he would not get arrested for, as Bryant called it, “doing God’s work.”

“He did the best he could,” Bryant said, “We’re just grateful he rushed her up here so we could get her in good hands.”

According to Bryant, the DFW is still “going to run some DNA to see if the DNA will also point to Humboldt as her origins.”  If it does, that means Tahoe will be returned to an area not far from the Humboldt Redwoods State Park when she is ready for release in about a year.

Since the cub was found outside the office of the BEAR League, she has become “quite a celebrity,” says Bryant. Still, the organization is working hard to make sure that the cub doesn’t identify too much with humans. Members of the rehab facility quickly worked to make sure she wasn’t fed her bottle by human hand. They incorporated a feeding bottle into the body of a giant duck (See this Post by the BEAR League.)

“We don’t want her to bond with us. She doesn’t need loving tenderness from us,” Bryant explained. The big fuzzy duck will help until another cub is orphaned. “It probably won’t be long [until] another one will come along,” Bryant said. “A couple years ago, we ended up with nine.” Then the cubs will have each other.

In about year though, if the DNA results “bear” out the unnamed rescuer’s claims, little Tahoe will be coming home to Humboldt. 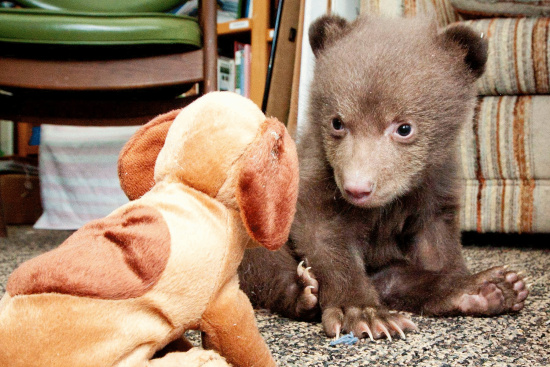 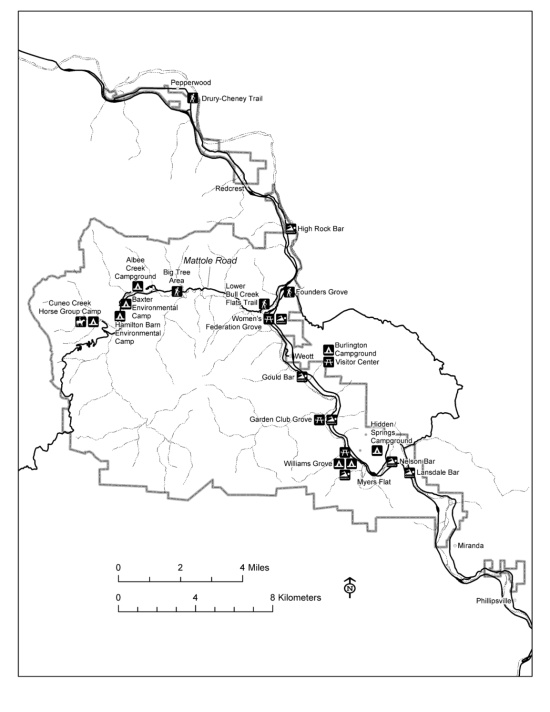 Map of Humboldt Redwoods State Park from California Dept. of Parks and Recreation.