« Accident Near Harris and H Street Sends Driver to Hospital

Another Eaglet Has Hatched! 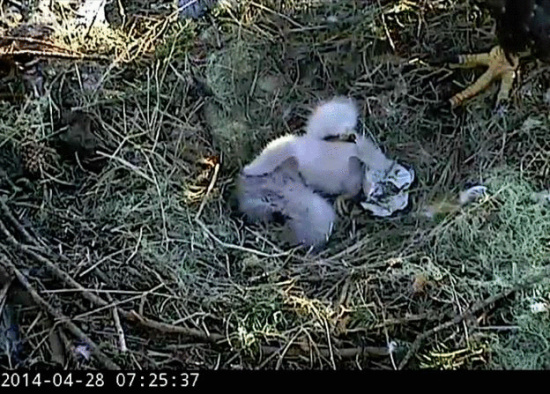 E1 drapes a protective wing over new sibling, E2 (We know…we know.. we’re anthropomorphising, but we can’t help ourselves… .) [Screengrab by Dottie Simmons]

Awaken to a glorious day, O readers! The second Humboldt Bay Eaglet has pecked out of its shell and is delighting the paparazzi once again. Known for now as E2, the tiny bird has joined its sibling E1 under the lens of the Humboldt Bay Eagle Cam.

E1 tumbled out of its shell on Saturday. Last year, the sibling pair hatched within 24 hours. This year, the process took a little longer but now the nest once again has two apparently healthy eaglets.

You can watch the nest and join in the chat here.