« Car Fire Which Threatened Two Structures Extinguished, May Be Linked to Burglary

[FOUND] Be On the Lookout: ‘86 Brown Toyota Taken Thursday » 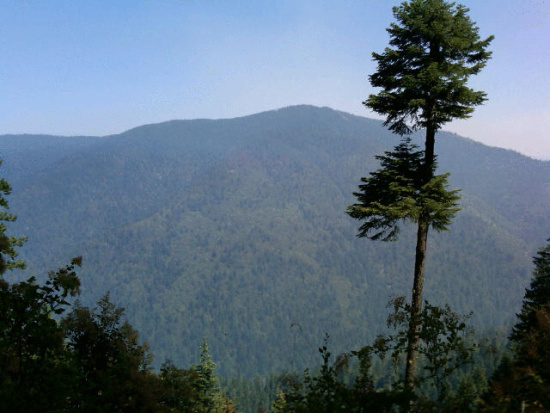 Picture shows the Slide Fire in the center with very little smoke. The smoke/haze
on the left of the tree is the July Fire on the Klamath National Forest.

The Slide Fire, on the Orleans Ranger District of the Six Rivers National Forest (NF), is 9.15 acres in size as of 11:00 this morning and 98 percent contained. Full containment is expected by end of shift this evening (Saturday). Full control of the fire is not expected for the next 2-3 days.

The fire is burning in heavy timber in the Boise Creek drainage. Because of the hard work the crews made yesterday, the fire managers decided there was no need for a night shift. Mop up is progressing today to 20-50 feet within the firelines.

The Mad River Hotshot crew and Florida Crew #1 are working today as well as Helicopter 512, which is providing logistical support on this fire. The Mendocino and Tahoe hotshot crews were released this morning to be available for reassignment.

Challenges to fire crews have been difficult access, steep terrain and burning materials rolling downhill that could ignite areas outside the fireline. No injuries have been reported.

Orleans District Ranger Nolan Colegrove said, “Thanks to all the resources that helped keep this fire small. It had real potential to become a large fire. Thanks again.”