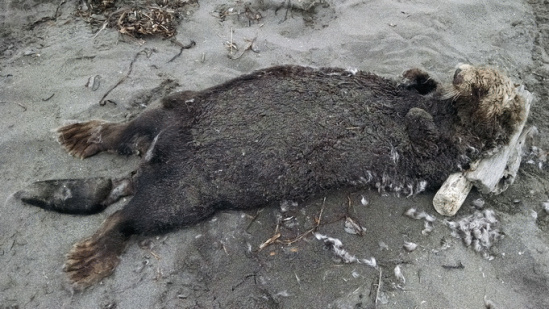 People often confuse the river otters frolicking around Trinidad as sea otters – understandable since they’re in the ocean. Sea otters, however, have long been gone from these parts after being hunted to near extinction. The recent discovery of a (sadly) dead sea otter on the South Spit is “darn rare,” according to marine mammal biologist and whale chaser Jeff Jacobsen.

Jacobsen reported that while counting snowy plovers, Grayson Sandy noticed the otter just above the high tide line. He called Jacobsen, who rustled up HSU students David Orluck and Eloy Lopez to help him drive out and collect it.

“It’s a male, 1.5 meters long, probably from the Monterey Bay population, a wandering dude who apparently got lost and hungry,” Jacobsen said. “no obvious signs of external trauma.”

The carcass will be sent via FedEx to the California Fish and Wildlife Department specialists, who will examine and dissect it to determine cause of death. “These critters are so special only a few folk have the permit to do a necropsy,” Jacobsen noted.  The skeleton will eventually be returned for the HSU Vertebrate Museum collection.

He finished with this thought: “Put this together with the green sea turtle and the shark sightings and the Risso’s dolphin stranding and you get… coincidence, not the end-of-the-world climate change scenario, yet.”