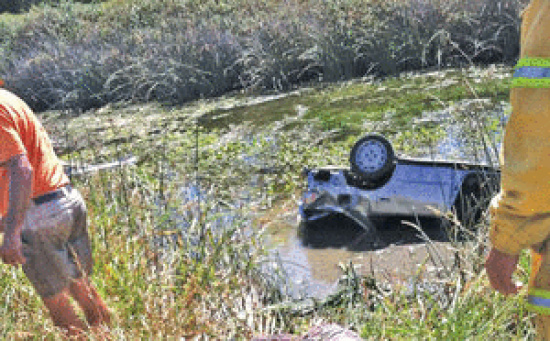 An accident on Hwy 20 turned into a quadruple fatality Saturday. The vehicle was partially submerged in a rice field after rescuers attempted to save the passengers. [Photo provided by Adam Stricker.]

Ferndale Police Sgt. Adam Stricker was recognized by a Colusa County newspaper for his attempts to save victims of a traffic accident on Hwy 20 this last Saturday, August 23. Stricker responded to questions about the incident from the Lost Coast Outpost with the following account. He wrote that he was two miles east of the city of Colusa when…

…I saw [a] few vehicles … stopped where they should not normally be stopped.  There were no road construction signs so I started looking around. I looked towards the drainage canal and saw the car upside down in the water, halfway submerged. The bottom portion of the vehicle along with the wheels were exposed. I didn’t see any first responders on scene so I exited my car, called 911 and tossed my phone to a bystander.  From there I jumped into the ditch with another male and we began removing people from the vehicle. The front passenger was removed immediately and taken up to the top of the roadway.

Then I went inside the car to see if anyone was inside.  I saw shoes, grabbed a hold of the shoes and realized the shoes had a human leg attached to them. I tried to get the person out but was unable to due to the seat belt. We cut the seatbelt holding the person in the back seat in and I realized the person was still trapped. I summoned for more bystanders, realizing I had a limited amount of time as I had already been on scene for about five minutes and the chances of survival were slim.

Myself and another man tried to lift the vehicle up on its side enough to open the door which was buried in mud. We continued to yell for more able bodied people to lift and after we had about 8 people in the water lifting on the side of the car we able to open the door and remove the rear passenger.

Law enforcement officers from Colusa Police Department, and Colusa County Sheriff’s Office arrived, they jumped in the ditch. We were all waist deep in mud making it difficult to move around.  We collectively worked together to get the driver who was also trapped from the vehicle. I spoke with [the passenger removed from the vehicle earlier] a non-English speaking East Indian woman and I asked how many in the car. She held her hand up with five fingers.

Eventually, it was determined that four of the occupants died. Only that first passenger rescued survived.

Stricker told the Outpost, “That was probably the most traumatic accident I’ve ever seen. I could not get the person untrapped… It was kind of heart wrenching. No matter what I could do, I couldn’t help.”