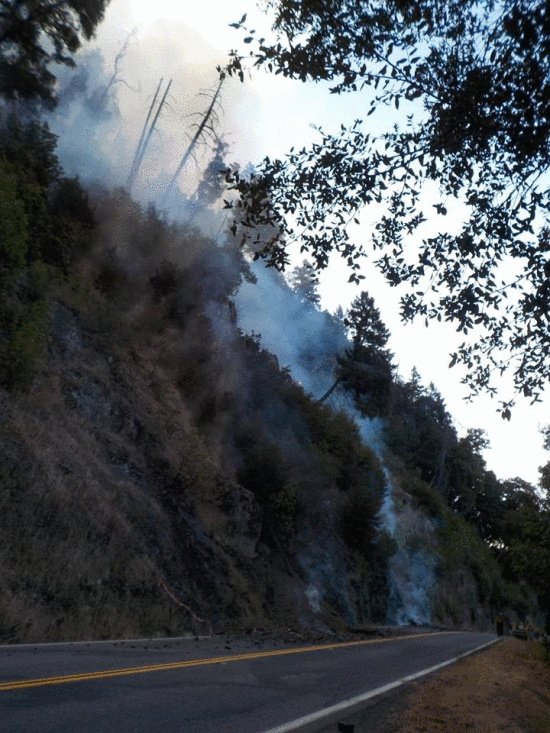 Burning debris falls onto Hwy 96 during the Sugar Bowl Fire. The road was closed for over a day because of the dangerous conditions. [Photo provided by Caltrans.]

The Hoopa Valley Tribe brought in teams and equipment from across the country for the first time this summer to help fight an unusually high number of fires; including many caused by arson.

“We brought in an arson investigation team to look into the human-caused fires in Hoopa,” Simmons said. “It’s been ongoing for over two months.”

Results of their investigations are still confidential, and won’t be publicly released until suspects are arrested.

The Hoopa Valley Tribe also won approval for long-term severity funding from the BIA’s national office to help deal with the extremely dangerous fire situation in the area.

The BIA crews have helped fight numerous fires caused by lightning strikes burning to the northeast and southeast of the Hoopa Valley, and 30 human-caused fires in the valley itself – including the Sugar Bowl fire that closed Highway 96 between Hoopa and Willow Creek earlier this month.

“We also helped with fire response in the Six Rivers National Forest and some backcountry fires our helicopter responded to,” Simmons said.

The arson investigations are still ongoing.

Last week, the Tribal Council voted to remove and exclude from the reservation anyone who deliberately commits any type of arson, citing the extreme threat to lives and livelihoods from human-caused fires.