On Monday, December 22, 2014 a collision occurred on Highway 101 near Benbow. The driver of the SUV that collided with the semi-truck died from injuries received in that collision. He has been identified as Steven Ray Castillo, age 47 years, of Leggett.

The Redway office of the California Highway Patrol is investigating of the collision. 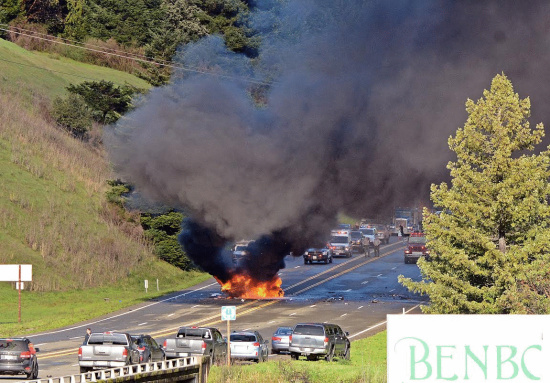 Smoke from the Mercury Mountaineer burning on the left merges with smoke from the burning semi on the right. [Photo by Talia Rose.]

The identity of the deceased is currently being withheld pending notification of next of kin.

At this time it is under investigation if the driver of the Mercury was wearing his seatbelt.

This collision remains under investigation by the California Highway Patrol - Garberville Area.