« DOLLISON’S DOCKET: What is Wrong in Humboldt, and Can We Right It? 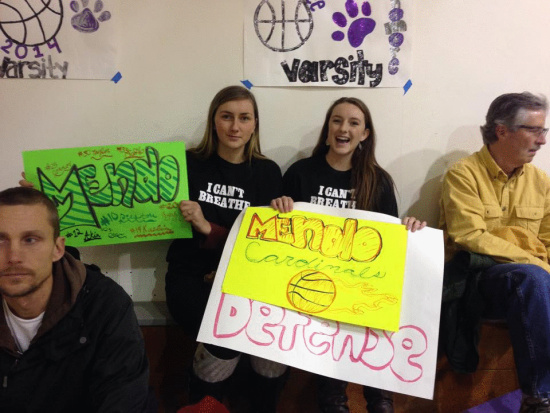 Members of Mendocino High School’s girls varsity basketball team, wearing the T-shirts that got them banned from a three-day basketball tournament in Fort Bragg, hold up signs cheering on the boys’ varsity team, which was allowed to play after 9 of 10 of the athletes agreed not to wear the shirts during warmups. [Photos provided by MendocinoSportsPlus.]

Wearing the “I Can’t Breathe” T-shirts that got them banned from a local tournament, some of the Mendocino High School varsity girls basketball team walked into the Fort Bragg gym yesterday to cheer on the boys’ team. When they approached the door, they didn’t know whether they would be barred from entering. But by the time they went to bed last night, they had not only attended the game wearing their shirts, they knew the ban had been lifted — too late for them to play but soon enough to allow the boys’ team to wear the shirts today in their pre-game warm-up.

The student athletes who spoke to the Lost Coast Outpost, including 16-year-old Connor Woods, were delighted about the decision. Woods is part of Mendocino High’s varsity boys team, but he chose not to play if it meant not wearing the controversial shirt, which refers to the dying words of Eric Garner, a black man who died while being arrested in New York. His teammates, however, agreed with the ban and participated in the tournament. Now, the ban’s reversal meant that he can stick to his principles and still get to play today.

In recent months, the death of young black men such as Garner, Tamir Rice, Michael Brown and others has ignited nationwide protests against racial profiling and police killings of unarmed black men. Mendocino team members say they wanted to bring attention to social injustice, but Fort Bragg administrators said they were worried the statement would ignite passions in a town recently rocked by the shooting death of a popular sheriff’s deputy.

Jin Jackson, 16-year-old co-captain of the Mendocino Cardinals girls team, said that earlier this month some varsity boys asked if the girls wanted to wear the T-shirts during warm ups. The girls team agreed, Jackson explained, because “in a small community like ours, we can still promote awareness of national issues such as police brutality.”

The girls’ and boys’ teams both first wore their T-shirts on December 16. “The initial reaction was nothing,” Woods said. “Nobody said anything at the game. No parents or viewers seemed to have any problem with it.”

The boys didn’t wear the T-shirts after that, Woods said, but the girls stuck with it. “They wore the shirts for the next three games,” Woods recalled.

The teams had been slated to play in the three-day tournament hosted by Fort Bragg High School. The students were heartbroken by the school’s original decision to ban them for wearing the shirts. Eventually, nine teammates from the boys team were allowed to play after agreeing not to wear the shirts.

As the controversy swelled, the Mendocino students were told that individuals wearing the T-shirts or carrying political signs to the the tournament would be barred.

“People took [the slogan] to mean we do not support police in general,” Woods said. Some commenters on social media sites even argued that the students were literally supporting the murder of cops. Woods explained that wasn’t the point at all. “Obviously, not all police officers have a part in police brutality,” he said. “The shirts are trying to convey that this is a problem that needs to be addressed in this nation… . It isn’t a problem in our county though.”

Woods’ grandfather was a California Highway Patrol Officer. His father, Marc Woods, said that it was particularly unpleasant to have people saying the students supported killing law enforcement officers. “These kids do not support the killing of cops,” he stated.

Connor Woods said one worst parts of this controversy was the comments in social media arguing that the kids didn’t know what they were protesting about and shouldn’t be allowed to continue. He was frustrated that these people wanted to stifle the voices of the student athletes. “Most were educated,” he stated. “And regardless of if you are educated on the subject or not, you have the right to voice your opinion.”

Some commenters asked, he said, what if other teams wanted to wear opposing T-shirts, onees that said something like “Breathe easy. Don’t resist arrest.” Woods said, “I would have loved to have seen people with that shirt. To me that is perfect. That is exactly what is my side.”

Anybody should be able to voice their opinion, he said.

Even though the two varsity teams made different choices and there were different opinions within the teams, the divisions didn’t cause hard feelings, said Emily Symons, one of Mendocino Cardinals student athletes. She explained, “I have twin brother on the varsity school team. I feel that although the two teams chose to go in different directions, there is a lot of support coming from both sides for each other.”

Woods agreed. “We’re a pretty tightly bonded team,” he said. “When I was told that I was the only boy that was sitting out, I was disappointed, but I respected the decisions of my teammates.” He still planned to attend the games as a spectator to cheer on his fellow athletes. “When I was told that the girls would be sitting out of the tournament too, it was good to know that I had other teammates there to stand with,” he said.

On Monday, the boys’ team was scheduled to play in the morning. The girls’ team decided to mount a protest outside the tournament.

Kierra Poehlmann, one of the girls team co-captains explained, “I think Jin, Emily and myself… we love basketball so much and we miss playing, but all our lives we were told that there were bigger things than sports. And this was an opportunity to show that we understood that.”

As the protesters arrived, they could see private guards (from Lear Security, famous for their work removing marijuana gardens). 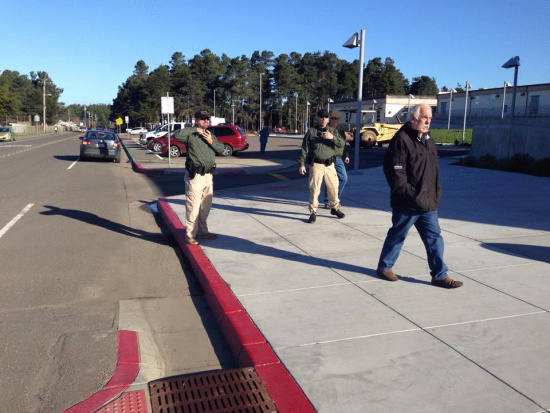 The teammates were joined by what they estimated was between 70 and 100 protesters. 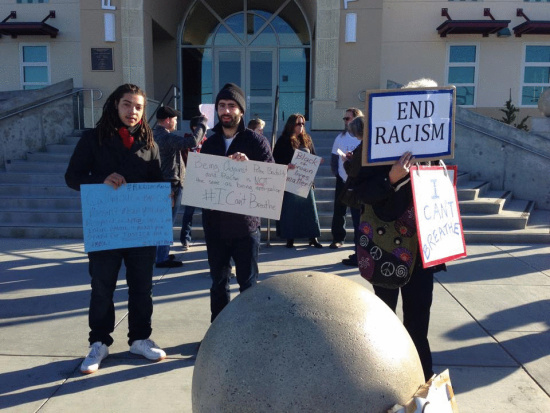 Some of the protesters carried signs.

According to Kierra Poehlmann, “After we demonstrated, Jin and I said some of us were going to go in. I went in with a group to the gym.” Poehlmann said that the security guards didn’t say anything.

Part of the reason might be the attorney who threatened to slap tournament hosts with a lawsuit. “I contacted the ACLU,” said Mark Woods, Connor’s father. At their recommendation, he said he retained an attorney who was ready to file a restraining order against the Fort Bragg Unified School District. 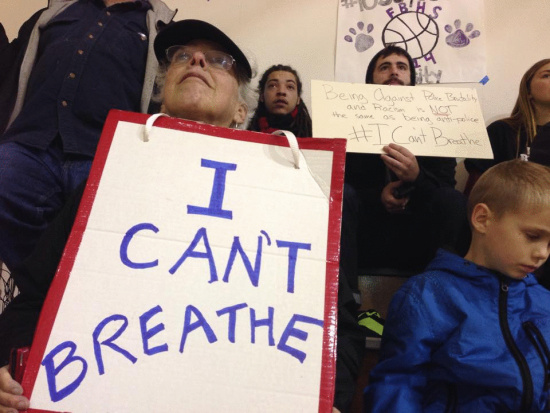 Protesters joined the Mendocino Girls Varsity Team in cheering on the boys team as well as displaying “I Can’t breathe” signs.

By evening, the two teams were told that the ban on wearing the T-shirts during warm-up had been rescinded. Though it was too late for the girls team to play in the tournament, the boys team could wear the shirts. Connor Woods was delighted. He said he had been very disappointed at not being able to play and still wear the shirts. “My mom was coming to town and she’d never seen me play basketball… . The third game is on the day of my birthday.”

His teammate Sean Symonds said he was also very pleased. Sean, whose twin sister Emily plays for the girls basketball team said, “At first when they kicked us out of the tournament, I was really bummed because our team has been waiting to play all year.” However, he said, after the boys team agreed not to wear the warm-up shirts, he was glad to play but disappointed that the team wouldn’t be able to participate in the protest. “Now that we can wear the shirts, we will,” he stated.

The team later received an email from their coach, Jim Young, saying he wouldn’t allow the team to wear the shirts in the pre-game warmup. However, Young’s email was followed by another from the Mendocino High School administrators stating that the shirts would be allowed. Young responded with another email saying that he would not be coaching the game, and the junior varsity coach would step in. One student athlete described this as a roller coaster of emotions.

Late yesterday evening, as it became apparent that the student athletes would be able to wear the “I Can’t breathe” shirts during warm-ups, Connor Woods talked about today’s game. “I will be wearing the shirt, and I’m confident that others on the team will as well.” He realized his T-shirt was dirty and said he needed to conclude the interview.

This morning the Mendocino boys varsity basketball team played without their coach and without warming up in the “I Can’t Breathe” T-shirts. 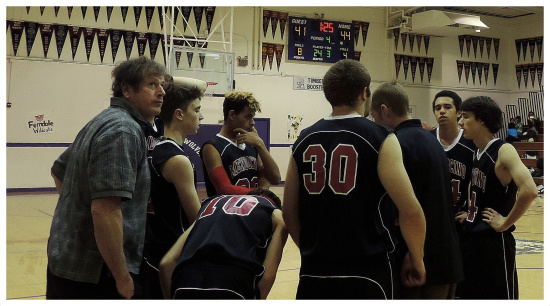 Mendocino Boys Varsity Team during a game earlier this year.

Note: MendocinoSportsPlus is providing continuing coverage of this story.