« Saved by the Alarm: Two ‘Close-calls’ Over the Weekend 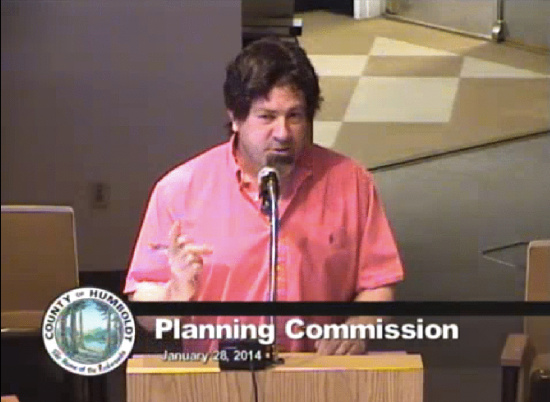 Kevin McKenny, Virginia Bass’s new appointee to the Humboldt County Planning Commission, will make his debut on that body Tuesday evening. The commission will continue its do-over review of the Conservation and Open Space element, one of the many interlocking components of the long-overdue general plan update.

What can we expect? Hard to say. But McKenny did voice some opinions of the draft plan approved by the previous Planning Commission when spoke to the current commission back on Jan. 28. McKenny approached the lectern for his allotted three minutes and proceeded to speak for nearly 18 minutes on what he sees as the problems and shortcomings of the draft.

His most sweeping suggestion was that the public outreach process should “start over” so that building professionals can be more fully consulted. “I went to the [original] meetings,” he said. “I wasn’t welcome there. Our ideas were not welcome.”

He added that he disagrees with “a lot of the elements” in the plan and believes that “mostly it was written to create developer fees.”

He also argued that the mitigation measures spelled out in the Conservation and Open Space element are too onerous and costly.

One of the sticky issues before the commission is exactly how to define wetlands — whether to use the state Department of Fish and Wildlife’s definition, for example, or something less stringent, like the one used by the Army Corps of Engineers. McKenny argued for a looser definition.

“The way it is now, if you have any standing water on your property during any part of the growing season, that qualifies as a wetland,” he said. “If we use Fish and Wildlife’s definition it will preclude development of the property. Rain will make wetlands everywhere.”

Officials from the Department of Fish and Wildlife later rejected that claim, saying several features need to be present before a property gets defined as a wetland.

Anyway, below you can watch the clip yourself. And if you’d like to watch tonight’s meeting, it should be available to stream online here.