Rainy Day at Humboldt—Making the Best of a Badminton Situation! »

The Eagles Are Back! 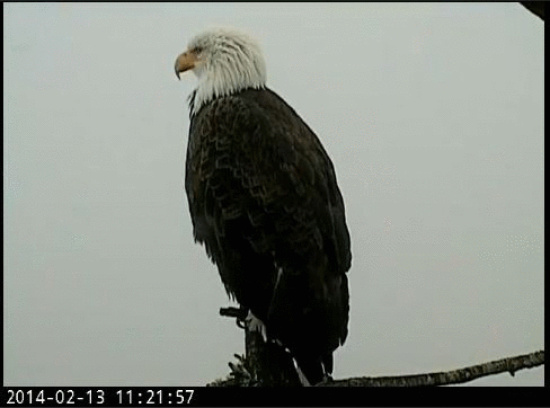 According to Sandra Hunt-VonArb, a senior biologist with Pacific Northwestern Biological, who has volunteered to monitor this nesting pair since 2006, the eagle pictured above in a screen grab taken from the Humboldt Bay webcam is the female from the mated couple that produced young last year. The shot above was taken earlier today.

Hunt-VonArb said that an eagle first showed up nearby a few days ago but today, around 10:30 an eagle landed on the nest and was quickly identified as last year’s female. “She still has her wonky feather on the left side,” explained Hunt-VonArb.  Even more exciting are the indications that the eagle appears to be readying the place for this year’s offspring.

“She brought a couple of sticks and perched on the nest tree itself,” Hunt-VonArb gleefully pointed out.  “She has been up there preening. The fact that she has been there this long is a good sign…that she is starting the whole process of nesting.”

During the writing of this post, the male showed up and the two eagles were filmed delivering sticks to the nest. (Take the time to click on the link. The quality of imagery is exquisite.)

“It is great to have something coming out of Humboldt County that is going worldwide that is positive,” said Hunt-VonArb delightedly.

While LoCO has the perch webcam embedded below, you can watch the perch and nest webcam as well as chat with the Humboldt Bay Eagle community on the same page. The Facebook page is found here. Peruse it for earlier screen grabs of the eagles. Here is a video explaining how the video cams on this nest came to be (The sound is a bit faint.)