A Kidney for Valentine’s Day 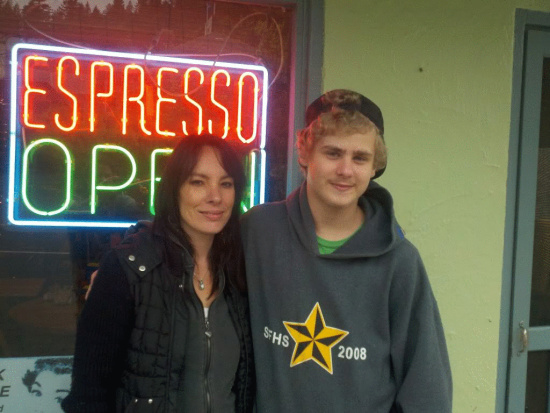 In 2012, Shannon Robinson donated one of her kidneys to Travis Chagolla just after this photo was taken. (Image provided by Chagolla’s mother.)

Two years ago, Shannon Robinson of Southern Humboldt gave her kidney to a stranger right after Valentine’s Day. The recipient was Travis Chagolla (age 15) of Myers Flat. Chagolla was born with defective kidneys. By age 5 he had already had surgery repairing some of the issues. However, one kidney didn’t function at all and, by age 14, the other was shutting down. Because Chagolla was adopted, there were no blood relatives to donate a replacement organ. He was going to have to go on dialysis.

Robinson was chatting with friends in a Myers Flat coffee shop when she heard of Chagolla’s condition. Robinson’s ex partner had been on dialysis so she knew how severely kidney damage could impact someone’s life. She thought about Chagolla’s condition and, a mother herself, she thought about how helpless his mother must feel. Within a few days, she volunteered to give one of her kidneys to the boy. (The story of how she came to do this is detailed in an earlier LoCO post.)

When her kidney was declared a match and she was allowed to donate, the community rallied around to raise money for her expenses. Although, the surgery itself was covered by insurance, the time needed to heal, which kept Robinson from her jobs as an electrician and a bartender, would have drained her savings and left her unable to pay her rent.

Robinson said, “The three months that I was recovering, the money that we got donated in the jars and the spaghetti feed was pretty much exactly what I needed. If I hadn’t had the help from the community, I very well could be homeless.”

In spite of her sacrifice, Robinson is a little ashamed of herself. She thinks she should have tried to reach out to everyone who donated money to help. She says with embarrassment, “I never did write something to thank everyone.”

But Robinson had a lot on her mind. It took quite a while for her to recover from the surgery.  She admits she underestimated the toll it would take. “I expected 2 or 3 weeks due to my healthy status,” she said ruefully. But it took the three months that the doctors predicted before she was ready to return to her work and almost a year before she felt completely healed.

The experience she had in the hospital was difficult but she says once she got home life got better. “It was unbelievably heartwarming how the people close to you can be so helpful,” she said.  Also, she was delighted that Chagolla took well to the transplant. “I saw him the very next day. He was already bouncing back.  As soon as he received [the kidney,] he felt great.”

Chagolla remembers the healing taking a bit longer. “I would probably say about after a month that was really when I got better. I was in isolation for several weeks. I couldn’t get out of the [hospital.]” Nonetheless, he did feel better quickly. “I had more energy,” he said.

He describes the pain as fading swiftly. “It didn’t hurt too bad,” he explained recently. “It hurt for the first two days or so. Then after that I’ve never felt it afterwards.”

He says that while he will never be as fit as a normal person, “It ‘s been good. I’ve had great results I’m back at school. I feel more healthy.”

Being with other kids can be hard sometimes though. “At parties,” he says, “I’ll see people just playing around but I’ll never be able to do that…. Compared to other kids that can show up to parties and get drunk or do drugs, I’ll never do that. I’ll never get the chance.”

But, he explains, his illness has also made him appreciate life.

I never want to take what I have for granted. I never want to mess with my body in a negative way… . I don’t take drugs and drink… . If it wasn’t for the transplant, I wouldn’t be as strict.

Feeling healthier has Chagolla thinking to the future. He has even started up a part time business. He has been fascinated with computers since he was young. He built his first computer from scrap in 8th grade. Lately, he has begun teaching others how to use computers for themselves. For a small fee, he helps people, mainly the elderly, learn how to use social networking sites. Someday, he hopes to “get a career based around computers.”

Chagolla says he still sees Shannon Robinson about once a month. It was a matter of incredible luck, he says, that Robinson offered to donate to him.  Patients can wait years for the right donor. “I didn’t expect to receive a donor so quick but that Shannon… .” His voice trails off then firms up. “”I felt happy that I was able to receive a kidney so easily… I was very grateful.”

Robinson, however, refuses to take all the credit for Chagolla’s transplant. She says,

I feel like it was a community effort… . It couldn’t have gone on for Travis without everyone. I think Humboldt County did this for him… . Anything that anybody did from cooking to saying nice things to donating to a jar, that’s what did it.

We all rock for that.

Robinson does say that she hopes people will consider donating themselves.

You don’t have to wait for your donor card to give something. Even donating blood is something that people can do. If you feel like you are healthy, definitely consider yourself as a candidate. Not only will you be fine but someone else will get to live.