LoCO On The Pot: Media on the Weed! » 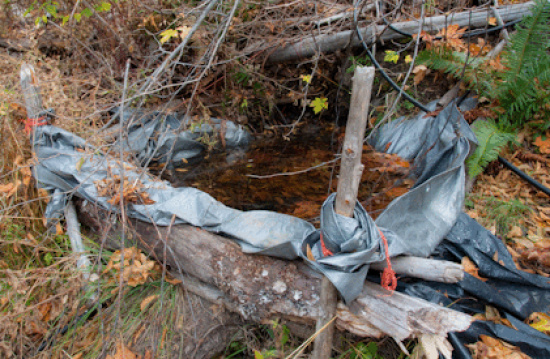 Marijuana growers, particularly those in California, should pay close attention to changes proposed in sentencing at the federal level and the likelihood of greater enforcement  on the state level this coming year.

The U.S. Sentencing Commission is considering, at the behest of California lawmakers, whether sentences for those convicted of inflicting environmental damage while growing cannabis should be subject to harsher penalties. (See information below the fold.) They are asking for public comment on

…whether the guidelines adequately address the environmental and other harms of drug production operations (including, in particular, the cultivation of marihuana) on public lands or while trespassing on private property….

Congressman Jared Huffman (D-San Rafael) who represents Humboldt, Mendocino, and Trinity Counties among others, believes that penalties need to encompass more aspects of trespass marijuana grows. A press release from his office (see below the fold) writes that prosecutions on federal property

In addition, and more immediately, the California government is doling out a greater amount of money this coming year for cracking down on growers. Claiming that “marijuana cultivation is threatening water supply, water quality and the sensitive habitat of endangered species,” the Governor’s budget has $3.3 million earmarked for hiring more Fish and Wildlife and State Waterboard inspectors, among other items designed to directly impact marijuana growers that damage the environment. (See Budget summary here.)

$1.5 million is to be used for seven positions to “investigate and enforce violations of illegal streambed alterations and the Endangered Species Act associated with marijuana production.” $1.8 million is to go to filling 11 positions designed to “improve the prevention of illegal stream diversions, discharges of pollutants into waterways, and other water quality impacts associated with marijuana production.”

Congressman Jared Huffman (D-San Rafael) today applauded the U.S. Sentencing Commission for agreeing to take action on the environmental damage caused by trespass marijuana cultivation operations. Huffman led a letter with California Senators Dianne Feinstein and Barbara Boxer and other lawmakers to the Sentencing Commission in November, asking that the agency help counter the environmental damages of drug production.

“Trespass marijuana grows are threatening endangered wildlife, contaminating fragile streams, and making forests throughout the United States unsafe for working and recreation,” said Congressman Huffman, who represents the “Emerald Triangle” of Mendocino, Humboldt and Trinity counties in northern California. “While we move towards a more rational marijuana policy—which I believe should include the decriminalization of marijuana—I’m pleased that the U.S. Sentencing Commission is moving forward on this critical issue, opening the door to an effective policy for cracking down on environmentally-destructive criminals. I urge my constituents and all concerned Americans to make their voices heard and ensure that we address the immediate threat to our environment and public safety posed by these trespass marijuana cultivation operations.”

In 2012, nearly one million marijuana plants were eradicated from 471 sites on National Forest lands found in 20 states across the country. The operators of these illegal grow operations frequently level hilltops, starting landslides on erosion-prone hillsides, divert and dam creeks and streams, and use excessive pesticides to grow their crop.

Individuals and private landholders, including ranchers, farmers, timber companies, and forest trusts, report that they are increasingly forced to confront criminals and eradicate drug operations from their own land, endangering lives and costing significant sums of money for eradication and reclamation.

Cultivation of illegal drugs on federal property is already a crime under the Controlled Substances Act, but prosecutions are rare and environmental damage is almost never fully accounted for. Under current law, environmental damages such as water diversions and vegetation removal are not considered as separate or aggravating offenses.

The U.S. Sentencing Commission’s request for public comment may be found here or copied below:

(C) Issue for Comment on Environmental and Other Harms Caused by Drug Production Operations (Including, in Particular, the Cultivation of Marihuana)

A person who cultivates or manufactures a controlled substance on Federal property may be prosecuted under 21 U.S.C. § 841 and subject to the same statutory penalty structure that applies to most other drug offenses. See 21 U.S.C. § 841(b)(5). As discussed in Part A, the base offense level for such an offense will generally be determined under §2D1.1 based on the type and quantity of the drug involved. The guideline also provides a range of other provisions that may apply in particular cases. For example:

(1) §2D1.1(b)(12) provides a 2-level enhancement if the defendant maintained a premises for the purpose of manufacturing or distributing a controlled substance; and

An offense involving the cultivation or production of a controlled substance may also be prosecuted under certain other statutes that take into account environmental or other harms.

(A) Section 841(b)(6) makes it unlawful to manufacture a controlled substance (or attempt to 36do so) and knowingly or intentionally use a poison, chemical, or other hazardous substance on Federal land, and by such use (A) create a serious hazard to humans, wildlife, or domestic animals; (B) degrade or harm the environment or natural resources; or (C) pollute an aquifer, spring, stream, river, or body of water. A person who violates section 841(b)(6) is subject to a statutory maximum term of imprisonment of five years. Section 841(b)(6) is not referenced in Appendix A (Statutory Index) to any offense guideline.

(B) Section 841(d) makes it unlawful to assemble, maintain, place, or cause to be placed a boobytrap on Federal property where a controlled substance is being manufactured. A person who violates section 841(d) is subject to a statutory maximum term of imprisonment of ten years. Section 841(d) is referenced in Appendix A (Statutory Index) to §2D1.9 (Placing or Maintaining Dangerous Devices on Federal Property to Protect the Unlawful Production of Controlled Substances; Attempt or Conspiracy). Section 2D1.9 provides a base offense level of level 23 and contains no other provisions.