Banks Be Merging Like the Borg: North Valley Acquired by Chico Company »

From the Peanut Gallery: Penis Masks and Flaccid Performances at NCRT 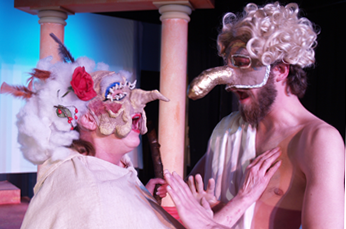 The North Coast Repertory Theater is throwing it back — waaaay back. 429 B.C. to be exact. Its latest production consists of two sexually disturbing one-act plays: the classic tragedy Oedipus the King by Sophocles and Woman in Congress by Aristophanes, a comedy of gender disguise, politics and giant penises. Unfortunately, the production never quite “takes us there.”

First, let’s run down both plays: In Oedipus the King, Oedipus (the king) rules over a city plagued by sickness and is determined to root out the cause. After promising to banish or murder the person responsible for bringing suffering to his people, he finds out, oops, it’s him. Sorry, dude. Bad things happens in Greek plays when you kill your father and sleep with your mother: You’re doomed to stab out your eyes and wander the world in absolute misery. Bummer.

Women in Congress centers on Praxagora, a woman who is sick and tired of being her husband’s servant and giving him enemas. Additionally, she resents being left out of the political process while a bunch of corrupt old guys hang around making up wars, getting rich and writing laws to keep women from making their own choices. Crazy, right? She enlists a group of women to march into congress in drag so they can outvote the men and pass laws to create a women-controlled utopia (sort of). Peace and equality, at last!(?)

Both plays have modernized language but keep the togas (because everybody likes togas). Michael Thomas directs the ensemble cast to play fairly realistically, meaning actors tend to “play small.” Confrontations take place in close proximity as opposed to ranging across the stage, what you generally expect in theater. The exception is in the opening, where Thomas utilizes stylistic lighting and sound to dynamic effect. Such a tease.

The set, designed by Calder Johnson, is artful and creates levels for some potentially powerful character interactions. Unfortunately, these moments are, at times, undermined by so many of the actors pushing their voices to convey emotion. 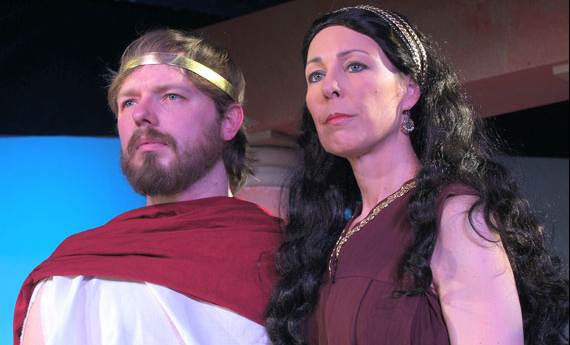 In both acts, the supporting cast is left to pick up the slack from weak leads. Calder Johnson plays a broken, childlike Oedipus from the onset, meaning we never really get to experience the ruler’s fall from greatness. He despairs throughout, and we along with him. However, perhaps inadvertently, his acting choices make the scenes with his wife/mother Jocasta, played by Shelley Stewart, especially creepy. Oh, you can feel the incestuous love. Oed (pronounced “Ed” here) also has some really satisfying moments with a believably reluctant shepherd played by Ed Munn and the prophet Tiresias played as the badass he is by Bob Service.

In Women in Congress, the laughs come with difficulty. I had to close my eyes to shield myself from some of the forced comedy between Praxagora — Stewart, in her second role of the evening — and her husband Blepyrus, played by Arnold Waddell. Lots of sitting when movement would have been nice. Again, some of the supporting cast redeem: Keep an eye on Toodie SueAnn Boll as Gusistrate, an old crone who’s either falling asleep or talking about gettin’ some, and also Jennifer Trustem as Rhodia, a sultry, swaying slut-bucket. The play’s young lovers also do OK: Taylen Winters plays Clinarete and Jon Edwards — who may or may not know he has a penis on his face — plays Chremes. (If you’re going to wear the cock, you’ve got to rock it, bro!) 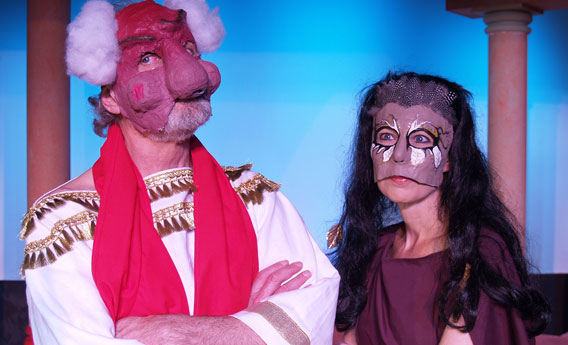 Greek plays are hard. Mask work takes years of exploration, and actors these days don’t typically train their bodies and voices to play larger than reality, in the manner that the stages of antiquity required. But it’s what makes the best theater, people! It’s the commitment to sustaining the physical reality of the world being created onstage that makes the audience believe it is there too.

Maybe you don’t get that here. But you get to see some eye-stabbing. Consider it your civic duty.