From the Peanut Gallery: Penis Masks and Flaccid Performances at NCRT » 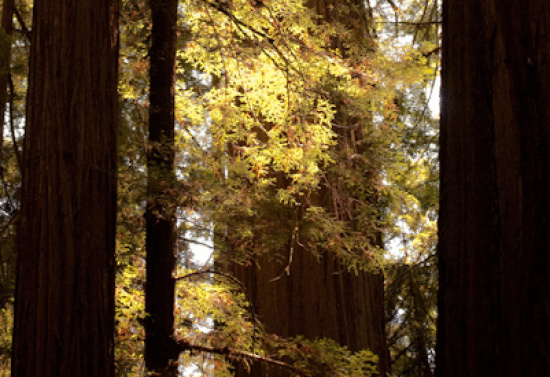 Today, one of many court rulings for the proposed Richardson Grove road project has fallen to EPIC and the Center for Biological Diversity. The project, which will adjust an approximately one mile strip of roadway through the venerable park to allow the passage of STAA compliant trucks, will require excavation work among the roots of the giant trees. A group of environmentalists fear this plan will adversely impact the old growth redwoods.

This afternoon, California Court of Appeal, while not agreeing with all the requests of the environmental groups, ordered a reevaluation of Caltrans’ assessment of the impact to the trees in the Grove when the agency adjusts the roadway. According to the Court documents, “Caltrans is not required to start the EIR [Environmental Impact Report] process anew. Caltrans need only correct the deficiencies we have identified before considering recertification of the EIR.”

“The significance of this ruling cannot be overstated,” said Gary Graham Hughes, executive director at the Environmental Protection Information Center (EPIC). “Our ancient redwoods are invaluable, and we hope Caltrans gets the message that their survival cannot be put at risk by a careless highway development proposal.”

According to Caltrans spokesperson Betsy Totten, her agency “…remains committed to delivering this important interregional transportation project in a sustainable way and will work to comply with the court’s ruling. This project is planned and designed not to remove any old-growth redwood trees. Measures are in place to protect the surrounding redwoods in that area.”

(Writer Kym Kemp is married to a Caltrans Project Manager.)

The California Court of Appeal today ordered Caltrans to reevaluate the environmental impacts of a controversial highway-widening project in Humboldt County that would harm irreplaceable old-growth redwood trees in Richardson Grove State Park. The appeals court unanimously found that Caltrans failed to follow the law in assessing impacts to ancient redwoods and providing mitigation measures to reduce potentially severe harm to the trees. Caltrans’ project—intended to allow bigger trucks to travel Highway 101 through the park—would require excavation, fill, and paving within the fragile root zones of Richardson Grove’s ancient trees.

“This is a victory for Richardson Grove’s ancient trees and for the generations of travelers, hikers and campers who have enjoyed their magnificence,” said Center for Biological Diversity attorney Kevin Bundy. “Caltrans owes the public a full and honest account of how its highway-widening plans could damage this irreplaceable state park.”

“The significance of this ruling cannot be overstated,” said Gary Graham Hughes, executive director at the Environmental Protection Information Center (EPIC). “Our ancient redwoods are invaluable, and we hope Caltrans gets the message that their survival cannot be put at risk by a careless highway development proposal.”

“This illustrates how important the California Environmental Quality Act is for ensuring that major projects are subject to a thorough environmental review,” said Patty Clary of CATs. “The court has made an important decision that respects our responsibility to protect Richardson Grove as a natural treasure for future generations.”

A separate lawsuit filed in federal court resulted in a 2012 ruling that Caltrans must redo critical aspects of its environmental analysis under federal law. The court cited numerous errors in mapping and measurement of affected old-growth redwoods, and found that Caltrans had been “arbitrary and capricious” in their use of “faulty data.”

Richardson Grove State Park is home to one of the last protected stands of accessible old-growth redwoods in the world, where drivers first encounter significant ancient redwoods when heading north on Highway 101. The park also contains essential habitat for threatened and endangered species such as the marbled murrelet and northern spotted owl, and its creeks still support runs of imperiled salmon and steelhead trout.

Caltrans first proposed the Richardson Grove highway-widening project in 2007. Opposition to the project has continued to grow, led by the Save Richardson Grove Coalition, a diverse group of community members including economists, business owners, scientists, and a consortium of 10 federally recognized Northern California tribes with longstanding ties to the grove.

The proposed Richardson Grove highway widening is one of several Caltrans projects that threaten sensitive environments on the North Coast of California. Caltrans is currently mired in controversy regarding the unnecessary and destructive Willits Bypass project, which has been fraught with permitting irregularities and is the largest wetlands fill project to be pursued in Northern California in 50 years.

Caltrans claims the Richardson Grove highway widening is needed to accommodate large-truck travel, yet Caltrans’ own statements and signage indicate that this portion of road is already designated for larger trucks and that Caltrans has exaggerated potential safety problems. Caltrans has not established that this project is necessary for safety or movement of goods and the economy. Smaller-sized commercial trucks already travel through the grove to deliver goods to Humboldt County and legislative exemptions have functioned to allow the passage of the passage of oversize trucks.

Plaintiff Trisha Lotus is the great granddaughter of Henry Devoy, who in 1922 transferred to California the redwood forest that became Richardson Grove State Park. Jeffrey Hedin is a disabled Vietnam veteran and a volunteer responder with the Piercy Fire Protection District. Bruce Edwards is a licensed contractor who travels the highway in both directions on a daily basis for his work. Loreen Eliason co-owned the popular Riverwood Inn in Phillipsville until her passing late last year.

The attorneys for the plaintiffs are Philip Gregory and Pete McCloskey of Cotchett, Pitre & McCarthy, Stuart Gross of Gross Law, Kevin Bundy of the Center for Biological Diversity, and Sharon Duggan, a long-time expert on environmental law.

The Center for Biological Diversity is a national, nonprofit conservation organization with more than 675,000 members and online activists dedicated to the protection of endangered species and wild places.