« LoCO on the Pot: Legalize Cannabis in America and in France? A Short History about a Long Love/Hate Relationship

Overnight the Red Fire, which is west of Willow Creek and South of Berry Summit, reached 250 acres. Yesterday’s containment of 20% dropped to 10% by approximately 8:30 this morning. It is now the biggest fire in Northern California under Cal Fire management but there is an even larger one under federal control east of Red Bluff which is known as the Campbell Fire.

There have been no evacuations and no structures are threatened.

Cal Fire is managing 158 people on the Red Fire. “The nature of the terrain being steep and heavy timber make it ‘a crew and helicopter show,’ explained Janet Upton, Deputy Director of Cal Fire. “This is very labor intensive.”

According to Upton, this is a multi agency operation. There are two Cal Fire helicopters, five Cal Fire engines, two Cal Fire bulldozers, and Five Cal Fire chief officers. In addition, the  California Department of Corrections is assisting in providing officers that help with the five 15 person inmate fire crews. The Forest Service is providing an additional bulldozer.  Humboldt Bay, Rio Dell, Loleta, [Willow Creek, Arcata,] Blue Lake, and Fortuna Fire Departments have assisted with five engines, a water tender, and four safety officers.  The US Park service has provided another engine. But the bulk of the personnel 136 is Cal Fire.

In spite of the large attack force, Upton said the warm weather for this time of year and extremely low humidity is making the fire difficult to fight. “We’re paying close attention…and hope to be on top of things today,” she said, “but we’ll probably be there for a couple more days.”

Having such large fires this time of year is “highly unusual even in the summer time,” Upton pointed out. And, she said, “Humboldt is one of our less busy units.” Humboldt, she noted, usually has had a lot of rain by now and even in the summer we “have the fog influence.”

“These dry conditions indicate just how serious the lack of rain has been,” she said. All of Northern California has been affected. In fact, today, Cal Fire has held everyone on duty (no leave allowed) in order to maintain enough personnel to assist if any new fires start.

Nonetheless, Cal Fire has enough money to deal with the unusual situation. “For decades,” Upton explained, “we’ve had access to an emergency fund …it is specifically earmarked to deal with wildfires. If for that some reason is not enough we have the ability to go back to the legislature and ask for more. Governor Brown has made it clear that we will have the money we need.” 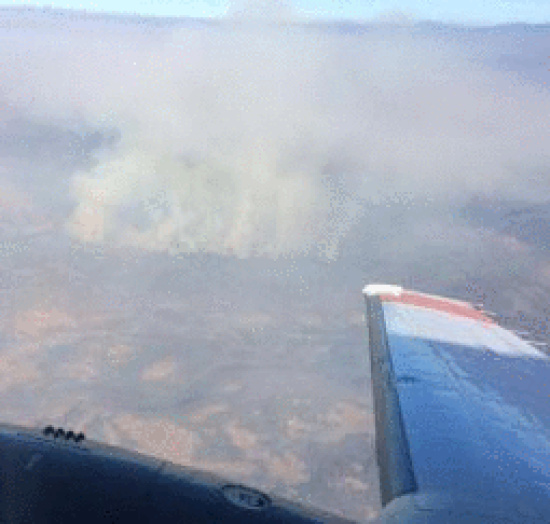 The Cambell Fire, east of Red Bluff, which official reports say is now 435 acres and 35% containment burns in remote terrain (Photo from the InciWeb.)