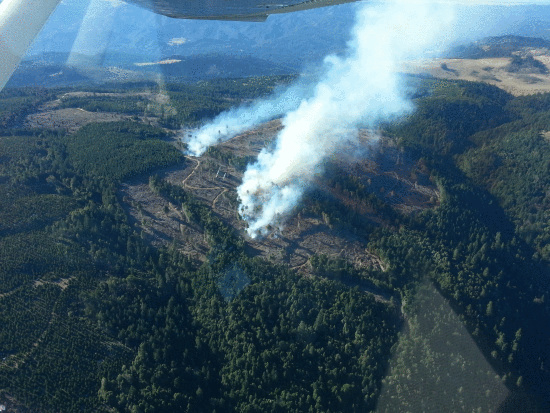 The Red Fire as it was first spotted (Photo by Larkin O’Shea.)

Ten wildland fires have burst out across Del Norte and Humboldt Counties since January 1st. Approximately 500 acres have burned in these few days. A combination of drought, unexpectedly low humidity, and wind in some areas provided the perfect storm.

A record low amount of rainfall dripped onto parts of Humboldt in 2013. As Paul Duncan from Cal Fire explained, “Not only are we below the historical record of rainfall, we are considerably below the record.” This has led to serious drought conditions.  Grass does not contain the normal amount of water for this time of year and catches fire easily.  A spark dropped onto the ground in a normal January would sputter and die but because of the situation, now it can kindle and grow dangerously.

In addition, during the weekend, several areas dipped into the single digit percentile for humidity.  This is comparable to August conditions and very unusual for this time of year. “The low humidities kind of caught us by surprise,” explained Duncan. “It was not predicted.”

The Red Fire, which is south of Berry Summit and the only of this weekend’s wildfires still uncontained, started Saturday. The cause is under investigation but several factors contributed to its growth.  A dry wind blew from the east. The humidity was a mere 6% in the area that day. The terrain was steep and the timberlands were parched. As of this morning, the fire had spread over 420 acres with only 40% containment.

However, the weather is staying cooler and becoming more moist. The humidity is coming up and this slows the growth of the blaze. And, Duncan says, “The wind has become more favorable to putting out the fire.”

In addition, Cal Fire has put a lot of resources into the area. Duncan said that roughly 500 people are there providing support or actually fighting the fire.

The causes of these ten incidents that occurred over the weekend are varied or unknown. Several are under investigation. Many began as controlled burns that escaped. Cal Fire is hoping to avoid more of this type of incident.

“We’re asking any folks out there that are planning to do controlled burns to check with air quality to make sure it is a controlled burn day,” stated Duncan. “With any open burning, exercise extreme caution until we receive measurable rainfall.”

According to the National Weather Service, there is a possibility of light rain tonight and tomorrow in areas of Humboldt and Del Norte Counties and some possibility of rain Wednesday and Thursday. However, the precipitation is unlikely to fall in amounts necessary to significantly impact the situation.

“We need to have several inches before we can reduce the severity,” explained Duncan.

The fire situation is volatile and Duncan said, “We want folks to make sure they are using lots of caution.” (1-866-287-6329 is the number to call to determine whether it is a burn day or not.)

A quick review of some of the fires in our area these last few days: