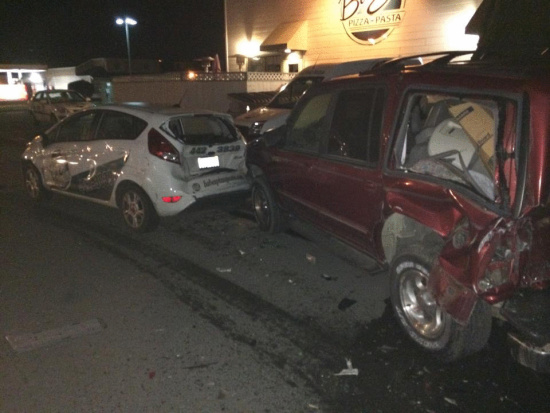 Two of the three vehicles allegedly damaged by a drunk driver in Eureka last night. [Photo by Hannah Yost.]

According to reader Hannah Yost who sent in the above photo, a woman driving an older grey Jeep Grand Cherokee hit a red Explorer on Walnut Drive in Eureka across from Murphy’s Market about 12:30 last night. Yost said the Explorer then hit the Babe’s Pizza vehicle as shown in the photo above.

Yost said, “A piece of the car got under hers and she was dragging it with sparks coming out from under her jeep.”

“I called the cops!” Yost wrote, “After she hit these two cars, she turned on Redwood Street and hit another. I listened and she blew a .14 and was arrested. She tried to give them every excuse in the book.”

“I just hope this story will help people to think twice about drinking and driving,” Yost explained.