(UPDATE) SUV Containing Deceased Driver Pulled Out of Freshwater Lagoon, Accident Thought To Have Occurred Over a Year Ago »

If the Redskins Name is Racist, What About Honest Engine? 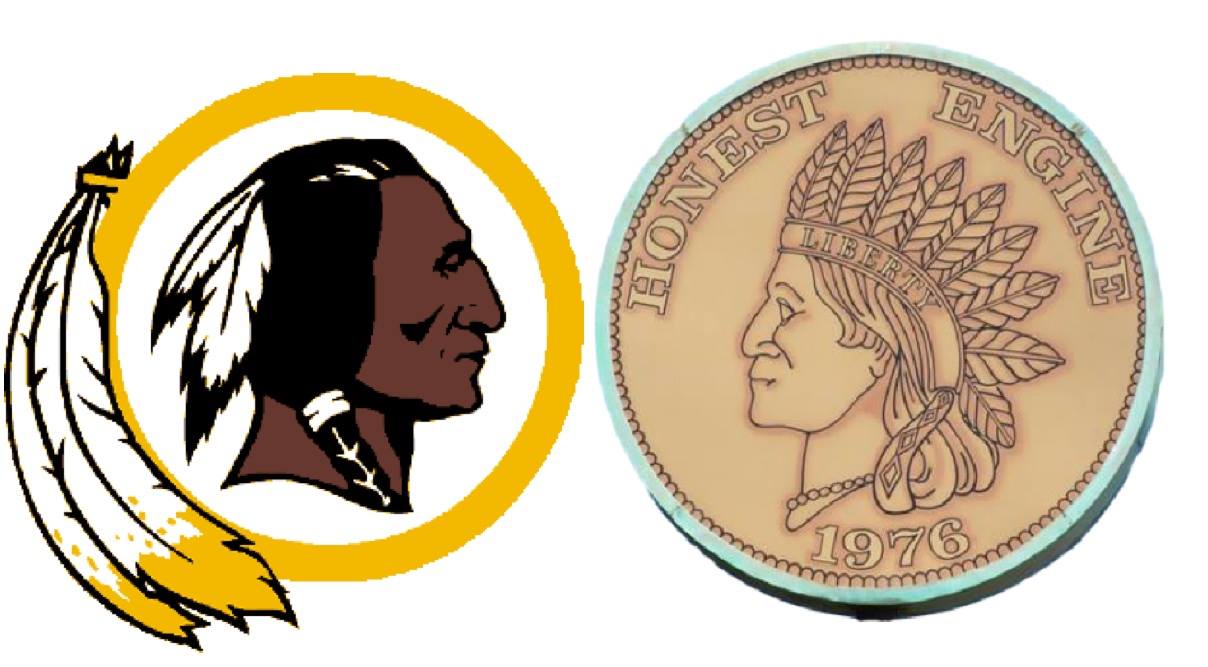 The Internet is abuzz today with news that the U.S. Patent Office has canceled several trademarks belonging to, as John Oliver calls it, “the-football-team-for-some-reason-not-yet-formerly-known-as the Washington Redskins.” The patent office ruled that the term “redskins” is “disparaging to Native Americans.”

The move comes — coincidentally it would seem — at the crest of a wave of public backlash. Last month 50 U.S. senators wrote a letter urging team owner Daniel Snyder to change the name, and President Obama recently suggested the same thing. (Snyder has vowed repeatedly that he’ll never do so.)

Anyway, all this hubbub got us thinking about a certain auto repair shop near Costco in Eureka.

Honest Engine has been in business since our nation’s bicentennial, and lest you miss the pun, its logo features an “injun” in a feather headdress — an apparent riff on the old Indian Head penny.

Is that racist? In our experience, opinions locally range from totally blasé (“Meh, I never even thought about it.”) to fairly incredulous (“How can they still have that name?!”).

While the phrase “honest injun” is arguably less incendiary than “redskins,” it has nonetheless caused offense in the past. Four years ago, for example, then-Republican National Chairman Michael Steele dropped an “honest injun” during an interview with Sean Hannity on Fox News, prompting the last living founding member of Chicago’s American Indian Center to ask, “How can you be so stupid?”

According to the Chicago Tribune, “She said that ‘injun’ is one of two words — the other is ‘squaw’ — that should never be used because they are throwbacks to a time when Native Americans were defined almost exclusively by negative stereotypes. (Also, this happened.)

In his 1994 book Watch Your Language! Mother Tongue and Her Wayward Children, the late (and notably white) English professor Robert M. Gorrell says the term is “probably offensive” in origin but has since become “relatively harmless, like honest to gosh or honest to goodness.” His use of “probably” here is a bit curious given his account of the term’s origin: “Honest injun goes back to the eighteenth century,” Gorrell says, “when it began as sarcasm based on the notion that an honest Indian was a rarity.”

We tried and failed today to reach Honest Engine owner Robert Neely. We’ll update if and when we hear from him.

The more lighthearted folks online today are having fun suggesting new names for the Redskins (see below). So how about it, LoCOtariat? Any good auto shop name ideas?

IT IS TIME RT @Danny_Concannon: Its time has come. The Washington Red Pandas. pic.twitter.com/1WNHFJP36V