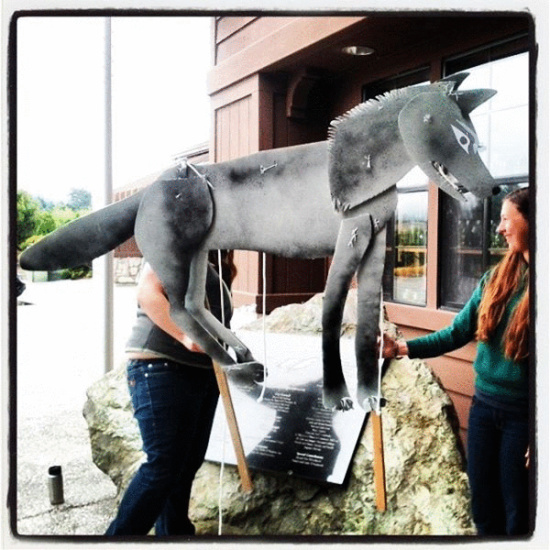 Activists set up a prop for today’s Fish and Game Commission meeting at the Riverwalk in Fortuna. [Photo provided by bird ally X]

According to Monte Merrick, Co-director of the Humboldt Wildlife Care Center, the Fish and Game Commission just voted at a meeting held today in Fortuna to add the gray wolf to California’s Endangered Species list.

At this point, the gray wolf has been pushed from its historic grounds in California and, except for one animal known as OR-7, there hasn’t been any sightings of wolves in this state for decades. However, with the help of a radio collar, biologists have followed an Oregon wolf known as OR-7 since December of 2011 while the wolf explored northwestern California. Just yesterday, the wolf was confirmed to be the father of pups at a den in southwestern Oregon [See photo below.] Wildlife activists believe that this will lead to wolves resettling parts of California.

Merrick said that Jacque Hostler Carmisen (also CEO of the Trinidad Rancheria) was the only one of the Fish and Game commissioners to vote no on listing the grey wolf.  The vote, with Commissioner Jim Kellog absent, was three to one.

“I am thrilled and relieved to see the beginning of the end of California and the west’s horrible record of dealing with apex predators,” wrote Merrick. “At last wolves will return to California fully protected by California law. That this historic vote happened in the County I call home is that much sweeter. “

For fun, listen to DeLapp announce her new position and Dronkers get his scoop! 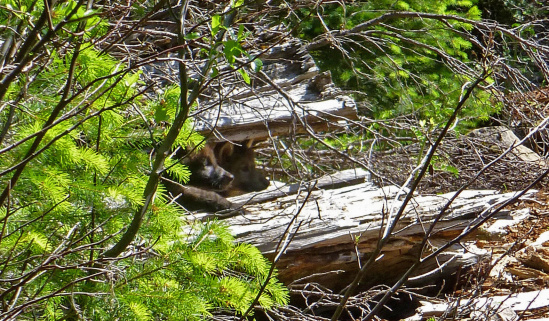 Two of wolf OR7’s pups peek out from a log on the Rogue River-Siskiyou National Forest, June 2, 2014. [Photo courtesy of U.S. Fish and Wildlife Service.]