« Let’s Watch 800 Kids Form the Shape of a Pelican From the Air!

DEAR LoCO: I Am Writing to You From Federal Prison

I am writing to you from the federal prison where I am currently doing time on a five-year sentence I received growing marijuana in Humboldt County’s very own sparkly corner of the Emerald Triangle. You have actively covered my legal story since federal agents first stormed our tranquil coastal community back in July of 2012 to arrest my brother Sean. I could not speak with you during the course of the investigation for obvious reasons, but now that the case has been adjudicated I see no reason not to be perfectly candid.

I want to inform your readers a little on how one gets busted by the feds, what the legal process is like and what life in federal prison is all about. I will not cover all that here now, but you can expect to hear from me again shortly, providing I don’t get thrown in the hole. Recently you published a statement of personal responsibility I crafted with the help and guidance of my outstanding attorney, William Osterhoudt, in an effort to appease the court. While I am not ashamed of anything I wrote, I would like to put that statement in greater context in order to shed light on the federal justice system.

The very first thing you need to know when dealing with the feds is that they have 98.5 percent conviction rate. That’s around double the conviction rate at the state level, so if you are indicted it’s serious business. The feds accomplish this amazing feat with leverage from lengthy mandatory minimum sentences, getting people to cooperate (rats) and from federal drug conspiracy laws, which allow testimonies from informants to be the only form of evidence necessary for a conviction. No setups, no wires, no phone taps, no scales, and no actual drugs needed. Just some one’s word against yours. Cute, isn’t it?

The stiff mandatory minimum sentences for nonviolent offenders, which have existed since the late 1980s, are triggered by the amount of drugs charged in the conspiracy. What is particularly important to know is the quantity of drugs in the indictment is usually arbitrary. Prosecutors tend to settle on a quantity they know will invoke a certain MM, which they use for leverage. In my case, the magic number was 100 kilos of marijuana. That’s 220 pounds for any of you stoners out there not used to the metric scale, and it carries a MM of five years. Now, in my case there was never a 100 kilo bust or an alleged deal of that magnitude but that is the number, based on the testimony of the rats, the prosecutors wanted to prove was involved between all parties over a six-year span. If you divide this number equally among the eight people charged and the six-year period, it works out to be just over four pounds per person per year. That is the burden of evidence needed to satisfy the charge, and, furthermore, testimony from informants of events that happened many years ago is considered sufficient proof of guilt. No actual physical drugs are needed as evidence. In fact, indictments with no real drugs present are so common that they have developed their very own vernacular. Attorneys refer to this phenomenon as a drugless bust, and here in the joint it’s what we call ghost dope.

So how do the feds build a conspiracy case? The answer is surprisingly simple and sadistic.

I was never busted with any marijuana plants or any weed at all and no one was ever busted with weed that came from me. However, people who were in some kind of trouble were able simply to name me and others as marijuana growers in Humboldt County and thereby save their asses. That is all it took. I was only indicted after my good friend, my ex- and others ratted in order to secure their own freedom.

In their “cooperation” with the feds every informant invariably told stories that omitted details contributing to their own culpability and shifted blame to others. As a result, my brother, Sean McFarland, my brother in-law, Jaymar Adams, and I bore the brunt of the attack because out of all the people charged we were the only three that did not selfishly shift blame, implicate others, or “rat.” And if there’s one thing that pisses the feds off, it’s someone with backbone. It’s not that we didn’t know other people involved in growing and selling marijuana in Humboldt or elsewhere. In reality we’ve lived and worked in this county more than long enough to know a mountain of people involved in the industry, but the fact is we chose to take responsibility for our actions. We were each faced with the same choice. The feds made it clear to us, “we had a way out.” We could “get under the MM if we just cooperated with them.” My brothers and I took the steeper path. One with integrity. We accepted the weight of the situation and chose not to place the burden on anyone else. Instead we carried our load with honor. It was one of the easiest decisions I’ve ever made in my life.

My statement of personal responsibility that was recently posted in the LoCO was crafted in an effort to show the courts the inconsistencies of the informants’ testimonies and to simultaneously demonstrate my taking full responsibility for my actions. In addition to that submission, more than sixty character letters written on my behalf by family and members of our community were also given to the court. We hoped to soften the judge by helping her see the whole picture, but in the end the stiff mandatory minimums set forth by Congress proved to be an insurmountable hurdle. As a result my brothers and I each received a five-year prison sentence with four additional years of probation.

Unfortunately, in the federal justice system sentences like ours are the norm rather than the exception. Thousands of first-time nonviolent offenders have been subjected to incredibly lengthy prison terms dating back to the late eighties. I am doing time with many guys who are serving 10-, 15-, 20-, and even 25-30 year sentences for first time nonviolent offenses. It’s insanity, and it comes with an enormous cost. The financial cost is to the tune of many billions, but it is the human cost that is the most tragic. For every person incarcerated there is a family left behind. A family left to mourn the loss of a loved one who is still alive but is lost behind bars. Children grow up without parents. Husbands and wives are separated, and families often break under the pressure.

When the judge sentenced my brother and me, she teared up. It was very real and sincere human emotion and it was entirely clear she did not want to give us so much time, but her hands were tied. She said she was sentencing us to shortest period of incarceration she possible could under the current laws and even urged the people present in the court room to “Please write Congress about mandatory minimums.”

Well, folks, for the first time in more than 30 years, sentence reform is being seriously discussed in Congress, and there are a number of proposed bills that could alleviate some of the disparities within our criminal justice system. Perhaps one of the most notable is a bill called the Smarter Sentencing Act, on which the US Senate is preparing to vote on June 14 of this year. This bill, if passed, will do a number of things, including reducing MMs for certain nonviolent offenses. Under the proposed bill, 20-year MMs will become 10s, 10-year MMs will become fives, and five-year MMs will become twos. Information regarding this bill and how to contact your senators in support of sentence reform is available at Families Against Mandatory Minimums web site, www.FAMM.org. The bill is not retroactive, so as it stands I will receive no direct benefit if it is passed, but everyone, myself included, can celebrate if Congress takes this giant step to righting our justice system.

I look forward to coming home, but for now I sleep in prison bunk 18 upper at Herlong Federal Prison Camp. My name is Brett Aaron McFarland, Federal Inmate ID number 12457-273. Here I live separated from from my wife, Julia, my work, and all the comforts of home. In spite of the adversity I feel strong, healthy and hopeful. My only great suffering comes from seeing my loved ones suffer and knowing the burden my wife now carries as she continues to manage our life in my absence. Recently she had to quit her job as a social worker with North Coast Family Services, doing home visits for Early Head Start, to be able to take care of our farm and run our family business. This journey is not easy, but my whole family is sticking together and I know we will only come out of it stronger. I pray no one reading this will ever have to face the full weight of “them Federali boys,” but if you ever do, I think you’ll get through it all right.

To my fellow farmers out there: Enjoy your summer, take pride in what you do and do it well. Best of wishes to all of you for a healthy and productive season … and if you see black, run like hell!!! 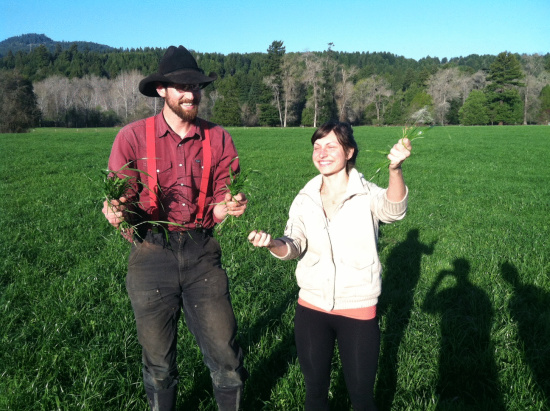