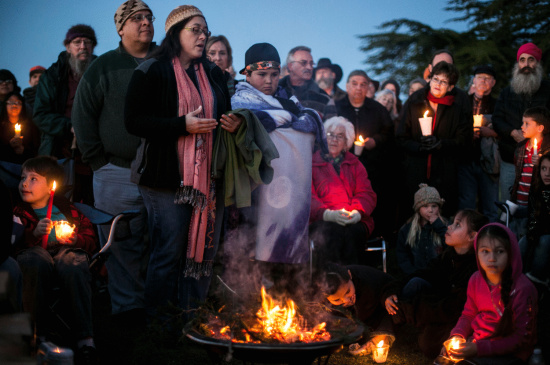 Wiyot Tribal members gathered in Feb. in remembrance of ancestors slain during the 1860 massacre. By Nick Adams.

More than 150 years after the Indian Island Massacre, the City of Eureka appears ready to formally apologize for what must be the darkest, most shameful chapter in its history: a brutal act of genocide against the native Wiyot people. (In case you’re not familiar, here’s a vivid primer from local historian Jerry Rohde.)

An action item on tomorrow night’s Eureka City Council meeting agenda would authorize Mayor Frank Jager to sign a letter of apology for the incident. The LoCO has acquired a draft copy of the letter, which you can read below.

The civic gesture comes just 10 days before the Wiyot Tribe resumes its traditional World Renewal Ceremony, which was interrupted by the murderous mob 154 years ago.

Here’s the draft of the City’s letter:

Dear Members of the Wiyot Tribe:

In February 1860, 154 years ago, citizens from Eureka participated in what has been described as a massacre of unfathomable proportions. On that winter night long ago, the Wiyot people of Humboldt Bay were attacked. That incident resulted in the death of scores of mostly women and children on the tribal island in Humboldt Bay. Worse yet, this attack occurred during the Wiyot Renewal Ceremony to bring healing to the Earth. The ceremony was never finished.

Today the people of Eureka are pleased to see the World Renewal Ceremony, that was cut short in 1860, will at last be finished. The ceremony will take place on island land deeded to the Wiyot people in 2004.

As Mayor of Eureka, on behalf of the City Council and the people of Eureka, we would like to offer a formal apology to the Wiyot people for the actions of our people in 1860. Nothing we say or do can make up for what occurred on that night of infamy. It will forever be a scar on our history. We can, however, with our present and future actions of support for the Wiyot, work to remove the prejudice and bigotry that still exists in our society today.