Vaccine Paranoia on the Rise in Humboldt County 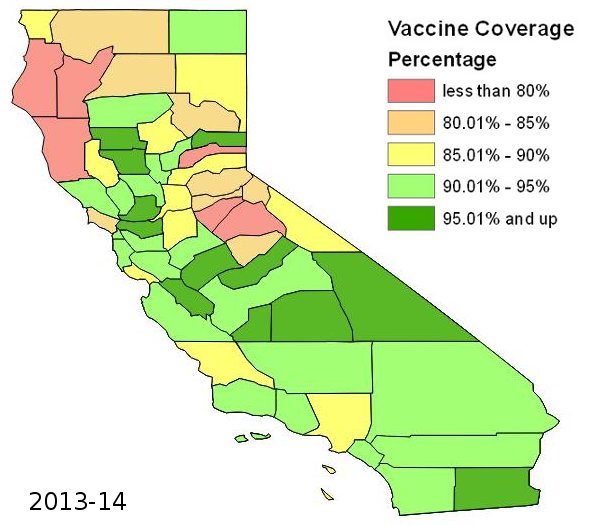 More and more parents in Humboldt County are choosing not to vaccinate their kids — way more than the state and national averages. At the start of the current school year, kids entering kindergarten in Humboldt County had the second lowest rate of up-to-date vaccinations in all of California. The downward trend in routine immunizations is not unique to Humboldt, but our county has seen a particularly steep decline.

Back in 2000, 91.5 percent of kids entering kindergarten in Humboldt County were up-to-date on their required immunizations. That’s above the 85- to 90-percent rate considered the threshold for herd immunity to such diseases as measles, smallpox, diphtheria and rubella. Other diseases, like whooping cough, require an even higher immunization rate to keep the whole community safe.

Since 2000, the vaccination rate among local kindergarteners has plummeted. At the beginning of this school year only 73.3 percent of kids — fewer than three out of four — had received all the vaccines required by the California Department of Public Health. Only Nevada County was worse, with a rate of 72.3 percent.

While the vaccination rate statewide has declined by roughly two percent during that timeframe, Humboldt County’s fell by more than 18 percent. 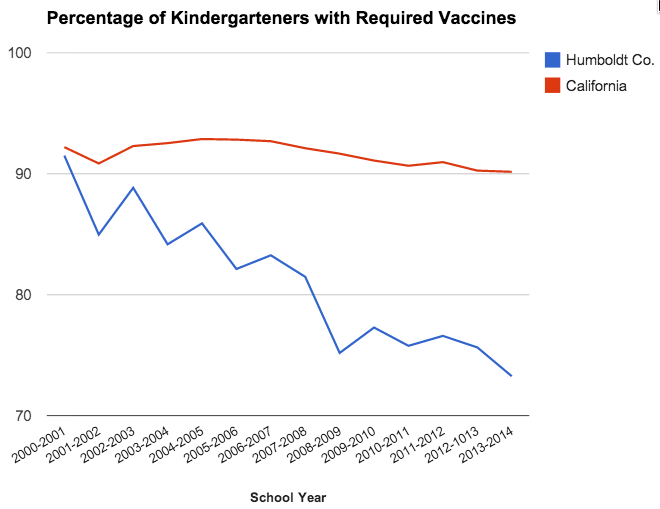 Why the big drop? Vaccines, after all, are widely considered one of the important and successful medical achievements in human history. And yet according to data available through the California Department of Public Health there has been a rise in so-called “personal belief exemptions.” That’s when parents choose to leave their kids unvaccinated, not for any documented medical reason but because vaccines are against their personal beliefs.

Again we see that the trend is particularly strong here in Humboldt County: 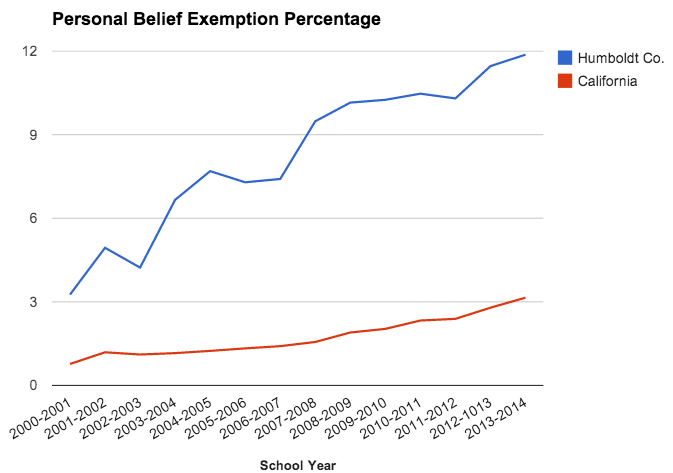 Up until this year, opting for that exemption has been as simple as signing a form, but a new state law, which went into effect on Jan. 1, requires parents to get accurate information about vaccines and a signature from a licensed health care professional before choosing the personal belief exemption. Gov. Jerry Brown undercut the law somewhat by allowing parents to bypass the new hurdle by claiming a religious exemption. Still, officials and health care professionals hope the new law will help curb the decline in immunization levels, a trend that’s been fueled by abundant misinformation and fear-mongering.

“There has been so much misinformation — on the Internet, in books and magazines,” said Susan Buckley, public health director of the Humboldt County Department of Health and Human Services. “This [new law] will enable accurate information for parents who are just not getting the right information from the right source. … I think people’s primary care physician is a trusted source. I’m really counting on a shift.”

Not everyone is so optimistic.

“I think it’s going to be a little more difficult than that,” said Richard Graey, superintendent of Mattole Valley Charter School, an unconventional institution with a dozen learning centers and students spread across five counties. Many of those students are home-schooled. Graey has a hard time imagining the parents in his district changing their minds on vaccines simply because of a new law. “In my experience with charter schools,” he said, “people who [take their kids] there are independent thinkers.”

The numbers bear that out. Mattole Valley Charter School is among the least vaccinated schools in the county. The graph below shows the six five Humboldt County schools with the lowest rates of fully vaccinated kindergarteners at the start of this school year. As you can see, five of the six three of the five are charter schools: 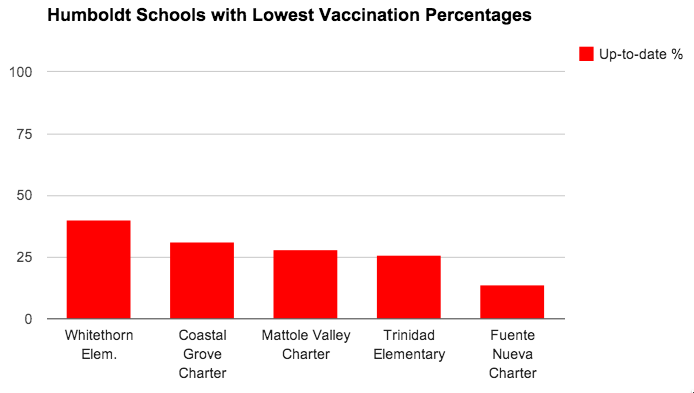 All told, less than half of the kindergarteners in Humboldt County charter schools were up-to-date on their vaccines. Coastal Grove Fuente Nueva Charter School came in last, with just three of its 22 kindergarteners, or 14 percent, up-to-date. Not coincidentally, Coastal Grove, another charter school, had the highest rate of personal belief exemptions, with 69 percent of parents purposely opting out of immunizations.

Why is Humboldt County — and its charter schools in particular — so vaccine-averse? It likely has to do with our culture, where alternative medicine meets anti-authoritarianism and nature is revered with almost religious fervor. (Vaccines are technically “unnatural,” as opposed to the highly infectious diseases they prevent.)

A 2012 story in Parade magazine pointed out that parents who reject routine vaccinations tend to be clustered together, often in “wealthy, well-educated” communities “where parents are often focused on being environmentally conscious and paying close attention to every aspect of their children’s development.”

In case you’re curious, here are the five Humboldt County schools with the highest immunization rates: 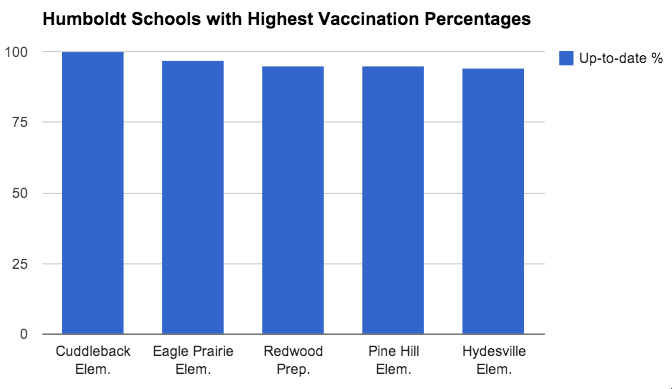 Nationwide, the anti-vaccine crowd’s growing ranks have reopened the door to outbreaks of preventable diseases such as measles and whooping cough. And worldwide, diseases that once appeared to be on the road to total eradication have stormed back. The Council on Foreign Relations recently published this terrifying map of vaccine-preventable outbreaks worldwide 2008-2014.

When parents choose not to immunize their kids, they’re not just exposing their own children to risks, as many a frustrated opinion writer has pointed out (here and here, for example).

“Some people can’t be immunized for medical reasons, or their protective response to a vaccine is weak,” Michael Gerson of the Washington Post pointed out earlier this month. “They depend on the immunity of others to avoid infection.” The unvaccinated also jeopardize newborns, pregnant women and the elderly.

California’s new immunization law aims to protect some of the vulnerable. Another component of the law is a requirement that unvaccinated students stay home from school for a minimum of two weeks if there’s an outbreak of a communicable disease.

But it may take more than strict rules to convince some parents to change their minds on vaccines.

Roxy Kennedy is the school records clerk at Mattole Valley Charter School. As such, she’s the person in charge of reaching out to parents to get their kids’ vaccination records or waivers, and she said there’s a variety of reasons why parents decline immunization.

“Sometimes it’s people who just want to do their own thing and don’t want the government telling them what to do with their children,” Kennedy said. “We have religious families who have their own opinions about doctors. Sometimes it’s just that the family is in hard times; they don’t have their acts together.”

Others believe that mass inoculation is a conspiracy enacted by greedy pharmaceutical companies with help from a complicit federal government. But the most common reason parents give for leaving their kids unvaccinated is their mistaken belief that the vaccines themselves are more dangerous than the diseases they prevent.

Kennedy sympathizes. “My kids have their shots,” she said. But it wasn’t an easy decision. She feels there are still “certain unknowns” about the safety of immunization. “I did it as a leap of faith, not necessarily because I knew what it was the right thing,” she said. “I understand why people are scared of [vaccines]. There are some people who still believe they can cause autism.”

This particular misconception can be traced back to a 1998 study by British surgeon Andrew Wakefield that linked the MMR vaccine to childhood autism. The study has since been thoroughly, repeatedly and resoundingly debunked. Wakefield was found to have falsified his research. His paper was discredited by government researchers and independent scientists alike, and Wakefield was stripped of his medical license.

But on the Internet, debunked research refuses to die. It stumbles zombielike through seedy Web ghettos where it gets mixed with conspiratorial malarky and repackaged to infect the gullible.

“Resistance to immunization is not new,” Gerson points out in his Washington Post piece. “In the late 1700s, some believed that the smallpox vaccine could turn people into cows. Today, however, there would be 1,000 Web sites alleging a sinister connection between Big Pharma and Big Dairy.”

What’s most infuriating to medical professionals is that providing vaccine opponents with scientific data can actually be counterproductive. According to a recent study, if parents who have mixed or negative opinions about vaccines are presented with information debunking the autism myth, they become less likely — not more — to get their kids vaccinated.

“Surprising as this may seem,” one of the study’s authors recently wrote in the New York Times, “our finding is consistent with a great deal of research on how people react to their beliefs being challenged. People frequently resist information that contradicts their views, such as corrective information — for example, by bringing to mind reasons to maintain their belief — and in some cases actually end up believing it more strongly as a result.”

So how can you actually convince people to change their minds?

Buckley also said parents are welcome to contact her at the county’s public health office: 445-6200.

Note: This story has been updated to correct and update some of the statistics.