Your Week in Eagle: As The Nest Turns » 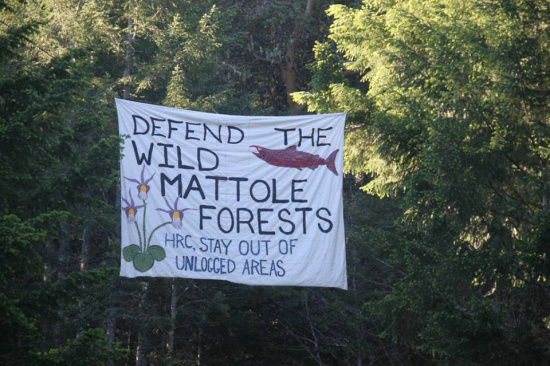 Mike Miles, Humboldt Redwood’s director of forest science, said that the decision to stop work was made out of concern for the safety of the six or so activists who showed up to film the company’s work, which was taking place off the Mattole Road just outside of Humboldt Redwoods State Park on the so-called Diamondback THP.

The timber fellers on the site were preparing the ground for an actual harvest next year, Miles said. Road construction crews were able to continue their work.

Humboldt Redwood Company logging in the Mattole could become a hot issue this summer. A group calling itself “Save the Mattole” (Facebook, Twitter) has been sounding the alarm about two upcoming timber harvest plans in particular — the Long Ridge and Rattlesnake THPs — which they claim will result in the taking of old-growth Douglas fir, among other things.

It’s not currently known whether today’s activists were associated with Save the Mattole — there appears to be no general call to action on either of their sites — but Miles said that the activists and the company have a disagreement over what constitutes “old-growth” Douglas fir.

He said that the company’s baseline for “old growth” is somewhere in the neighborhood of 200 years or older, and reiterated the company’s longstanding promise not to log them. The trees that Save the Mattole is concerned about, he said, are about 100 years old or younger — trees that have taken prairie that was formerly maintained by Native American forestry practices.

Miles said that the company would be happy to work with the activists, both now and in the future, if all they seek to do is document the company’s forest practices. “We’re looking to try to get them release of liability and hardhats, and they can be out there all they want,” he told the Outpost this afternoon.

He said, though, that there was some indication that the activists were ready to move “to the next stage.”

What happens tomorrow? “We’re thinking about that now,” Miles said. “We want to maintain our livelihood and carry out these state-approved plans.”

KMUD News is going to have more on this story in tonight’s 6 p.m. newscast: