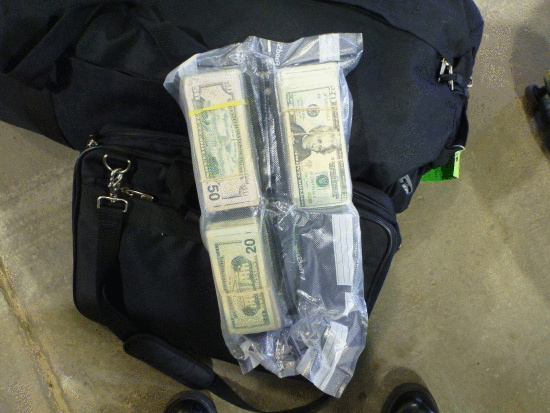 A case involving two Humboldt County men is receiving national attention because money the two claim was used for legal gambling was seized in a traffic stop and the two not only fought to have the money returned but are seeking compensation from the officers who stopped them and took the cash.

The men—William Barton Davis, age 51, of Eureka and John Newmer­zhycky, age 43, of McKinleyville—claim that they were traveling in Iowa on April 15, 2013 when they were stopped illegally. The officer said he pulled them over for failing to signal when pulling into the left lane to pass another vehicle. Video below from the officer’s dash-cam shows the car blinker was activated.

The car was searched as a result of the stop and over $100,000 in cash found and seized along with “a grinder with residual bits of marijuana.” As a result of that find, the Humboldt County Sheriff’s Department was notified and the residences of the two men here were served with search warrants. According to a press release put out by the Humboldt County Sheriff’s Department on April 17, 2013, marijuana products were found at both homes. The release states that at one residence,

[a]gents located approximately 3 ½ pounds of hash, approximately 224 grams of hash oil, one pound of processed marijuana, and 450 growing marijuana plaints ranging from 2” to 8’ in height. There were also scales and paperwork indicating sales of marijuana.

At the second residence,

Humboldt County prosecutors, after getting a clearer understanding about the original traffic stop, declined to press charges on the items seized here stating, according to the Washington Post, “…[T]he traffic stop was done without probable cause.” Thus, the prosecutor said, all the subsequent seizures were “fruit of the poisonous tree” and should not be further pursued. As of a month ago, money frozen in one of the men’s bank accounts by Humboldt County authorities still had not been unfrozen.

When the Humboldt County men and their attorney fought back against the initial cash seizure, about 90% of the money was returned. But the two weren’t satisfied. The two allege their rights were violated by the officers who seized the money and the men who trained them how to do it.

The men allege in a suit that

[u]nder a little known but increasingly scrutinized legal device called civil forfeiture, the drug interdiction units of the Iowa State Patrol…have been confiscating cash and property from mainly out-of-state motorists under the fiction that the cash and property itself is guilty of a crime. Even if the owner of the property has no connection to criminal activity, the State of Iowa sues the property and its owner in civil actions … and requires property owners to come into open court and open their financial records to prove their innocence [in order to regain their property.]

The whole process of Civil Forfeiture, the laws which allow government agencies to take assets from people that haven’t necessarily been charged with a crime, is being scrutinized closely. The Washington Post, The New York Times, and even John Oliver in his comedy show have all addressed the subject in the last month.

The process almost always allows law enforcement agencies to keep some or all of the property seized. The concern voiced by many (see the following study for one example) is that this encourages officers to put profit above public safety. An Institute for Justice study from 2010 states, “[P]erhaps the most troubling aspect of modern civil forfeiture laws is the profit incentive at their core. The overriding goal for law enforcement officials—both prosecutors and police—should be fair and impartial administration of justice. However, civil forfeiture laws at the federal level and in 42 states dangerously shift law enforcement priorities instead to the pursuit of property and profit.”

Government agencies however, often contend that civil forfeiture laws are necessary to crush crime syndicates and bring in funds necessary to run their offices.

This case that the two Humboldt men have brought is bringing more scrutiny to bear on the process of civil forfeiture and the way police departments use the money they bring in from it. It will be interesting to see how a case with local connections affects the national dialogue.