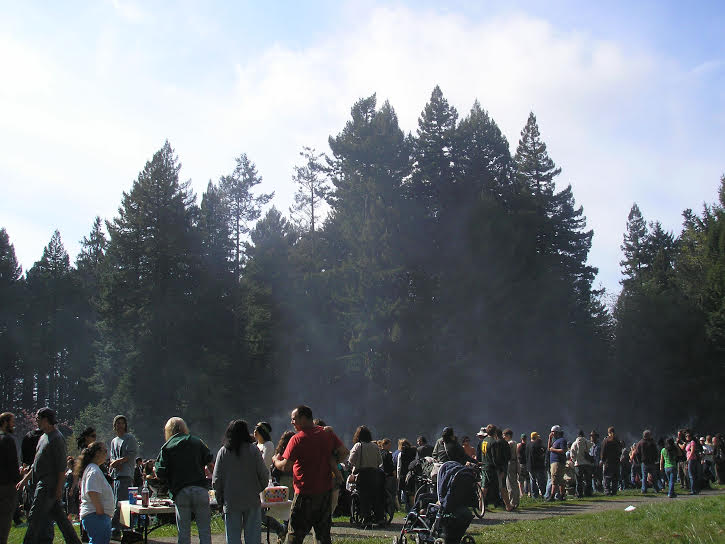 The City of Arcata is getting sued for closing Redwood Park during the “counterculture holiday” of 420 (that is, April 20), thus preventing the annual assemblage of weed smokers celebrating weed by smoking it.

The suit alleges that, in the wake of the 2009 episode of the A&E show Intervention dubbing Arcata “Pot City, USA,” Mendosa and Chapman “concocted a five-year plan to close Redwood Park on April 20th and to end the 420 gathering.”

When Allen tried to attend the festivities in 2010, the suit alleges, he “was unable to enter the main grassy area of the park, which had been cordoned off by police.” Others were given the same treatment that year, and the suit alleges that law enforcement questioned people and issued citations in the adjacent community forest — focusing on the pot partiers.

“The increased scrutiny and enforcement directed at plaintiff and other 420 celebrants was done on account of their exercise of their First Amendment rights, and amounts to viewpoint discrimination,” the suit says.

The City has continued to harsh the 420 vibe in subsequent years. “One year the City scheduled tree-limbing operations at both entrances to the Park on April 20th,” the suit continues. “Another year, the City dumped 2,000 pounds of smelly fish-emulsion fertilizer in the park to deter the 420 celebrants.”

The suit says that these “subterfuges” violated people’s rights to free speech, to peaceably assemble and to petition for redress of grievances — namely, restitution from The Man for 70 years of prohibition. The suit claims that a majority of the city council was aware — and approved — of the five-year plan to close Redwood Park on April 20.

That alleged plan seems to have worked. “On April 20, 2014, the event was dead; almost no one showed up to celebrate,” the suit says.

The suit, which alleges that Allen can sue on behalf of other 420 celebrants, seeks punitive damages against Mendosa and Chapman in an amount to be proven at trial, as well as attorneys fees. And furthermore, the plaintiff wants the full glory of Redwood Park’s 420 tradition restored:

In a press release last year, the Arcata Police Department described its approach to 420 as strict enforcement of the Arcata Municipal Code’s restrictions on smoking and drinking alcohol in Redwood Park and the adjacent community forest.

A copy of the complaint is available in pdf form here.