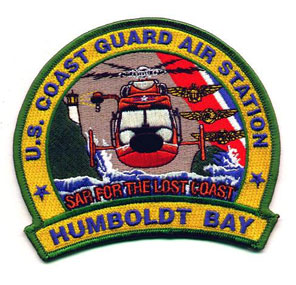 A Coast Guard helicopter flying over Arcata was targeted by an individual with a laser Friday evening.

The MH-65D Dolphin crew was returning from an operation in southern California when the incident occurred. The laser shined directly in the eyes of both pilots and appeared to come from Janes Road at Upper Bay Road in Arcata.

Lieutenant Josh Smith was one of the pilots. “We were at approximately 1500 feet returning to the base when a green laser shined from left to right across the cockpit, shining in both our eyes (the pilots). We tried not to look at the laser, but flying on the instruments while looking away from it (the laser) is very difficult.” Coast Guard pilots often fly solely by looking at the cockpit instruments without outside visual cues, but are trained to look away from a laser targeting the aircraft to protect their eyesight. Even if not directly hit by a laser, being forced to look away from the instruments can result in the pilot literally flying blind.

Laser pointers can cause glare, afterimage, flash blindness or temporary loss of night vision, all causing great danger to the crew. If a laser is shined in the eyes of an aircrew member, Coast Guard flight rules dictate that the aircraft must abort its mission. In order to protect their health and safety the member is taken off flight duty until cleared by a flight surgeon. This hinders the Coast Guard’s ability to respond to people in distress and conduct training.

It is a federal crime, as well as a violation of California state law to aim a laser pointer at an aircraft. If an individual is caught purposefully lasing an aircraft, punishment ranges from being arrested or having to pay a civil penalty of $1000 up to $2,000 and 3 years imprisonment. Federal law allows for a punishment of imprisonment of up to 5 years. A list of California aviation laser incidents can be seen at the following location: http://laserpointersafety.com/news/news/aviation-incidents_files/tag-california.php. Anyone witnessing this crime is strongly encouraged to immediately call 911 to report the incident.

The Coast Guard wants to prevent future laser strikes and is working with the Federal Aviation Administration and the Arcata Police to investigate the incident.