Helicopter and Law Enforcement in Benbow » 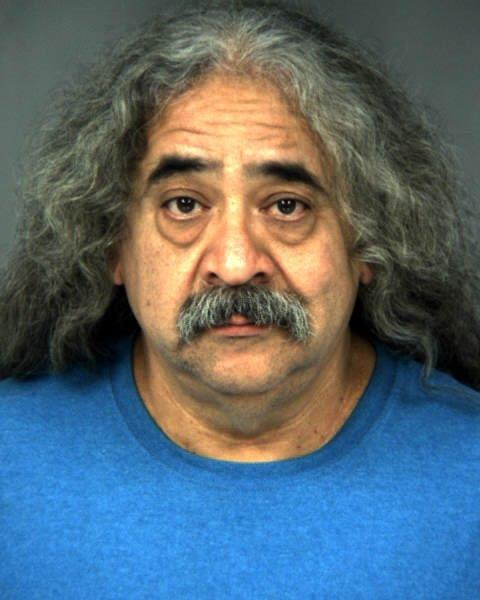 On 09-24-2014, at approximately 2:30 a.m., the Humboldt County Sheriff’s Office received a 911 transfer from the California Highway Patrol regarding an assault with a firearm that just occurred. The victim had flagged down a passing motorist on US 101 near Miranda and reported his roommate was armed with a handgun, had fired shots and threatened to shoot him.

Two California Highway Patrol Officers and a Humboldt County Sheriff’s Office Deputy responded and met with the victim at US 101 and the Miranda/Phillipsville Exit. The 51 year old male victim told the investigating deputy he lived at a residence in the 1500 block of Maple Hills Road, Miranda. He lived at the residence with a male and female roommate. At approximately 2:00 a.m. he and the male roommate, identified as Gregory Moreno, 59 years old, got into an argument in the living room of the residence. During the argument, Moreno removed a black and silver handgun from his waistband and pointed it at the victim’s head and stated he was going to kill him. Moreno then lowered the handgun and shot it into the floor of the residence. Moreno raised the handgun again and pointed it at the victims head again, while the victim pleaded for his life. Moreno asked the victim why he should not kill him and fired the handgun again into the floor of the residence. Moreno then threatened to pistol whip the victim. The 57 year old female roommate was awakened during the event and came to the victim’s aid. She stood between Moreno and the victim allowing the victim to escape the residence.

The Deputy and C.H.P. Officers drove to the residence and Moreno exited the home. He met the officers in the driveway and complied with their demands. He was arrested without incident. The deputy spoke with the female roommate who corroborated the victim’s account as to what occurred. The Deputy and C.H.P. Officers also located evidence in the residence consistent with what the victim told them, including a loaded .40 caliber handgun.

No one was injured during the assault.

Moreno was arrested for assault with a firearm, brandishing a firearm and threats. He was transported to the Humboldt County Correctional Facility where he was booked. His bail was set at $100,000.00.